We all have those special movies to watch during the holidays. Most of them have similar themes, dealing with generosity, cheer, family, and all the things that make the holiday season so special. But there are those among us who get in the mood for something a little more creative this time of year, with movies that deconstruct, or outright distort some of the best things about Christmas. Here are some of the best, most unsung cinematic romps to pop in for some yuletide cheer.

Die Hard is without a doubt the greatest Christmas movie of all time, and anybody who disagrees is wrong. But its sequel is something of an unsung holiday classic, enjoying many of the Christmas imagery and themes that helped sell the original so well. On Christmas Eve, John McClane wants nothing more than to enjoy a quiet holiday with the family. But when terrorists seize control of an airport and threaten the plane his wife is on, the grizzled cop now has to teach a gang of evil mercenaries how to do their best impressions of swiss cheese. Christmas arguably plays a more central role in this film, McClane regularly quipping that he just wanted to spend a normal holiday season with his family when duty calls. There are also some nice set pieces, such as an exciting chase on snowmobiles, and a mercenary getting stabbed to deal with an icicle. If you’re like me, it just isn’t Christmas without Hans Gruber falling off Nakatomi Plaza. But once he hits the ground, there’s no better time to swing by for that rocking party at Dulles International Airport.

This movie opens with Jingle Bell Rock and ends with a nice quiet Christmas dinner, and crams all the action it can in the middle. We all know the story of a grizzled cop named Murtaugh who is forced to partner up with a deranged psycho with a badge named Riggs. Together the two must take down Gary Busey’s drug empire, and save Murtaugh’s family so that Christmas dinner can be properly tended to. Shane Black works Christmas into a lot of his movies, though Lethal Weapon is perhaps the most obvious example, filling itself with constant holiday imagery that fills the air with yuletide cheer even in that sweltering LA heat. Many people mention Die Hard as the greatest Christmas themed action film of all time. That is true, but Lethal Weapon is well deserving of love this holiday season.

When thinking about what to do around the holidays, getting revenge on your cruel bosses doesn’t generally come to mind, but that’s exactly what happens in this classic 1983 comedy. Two selfish billionaires wage a bet to see whether they can turn a man from the slums into a successful executive while simultaneously ruin the life of one of their hardest working employees. When the pair get wind of the scheme, they band together to exact a fitting revenge against the men who used them. You know, in the spirit of Christmas. There are numerous holiday themed set pieces in this film, but the highlight is easily the suicidal rampage of a deranged Dan Aykroyd wearing a worn out Santa suit. This tale of two unlikely partners getting even may not be in the Christmas spirit of forgiveness, but it will fill you with sadistic cheer all the same. 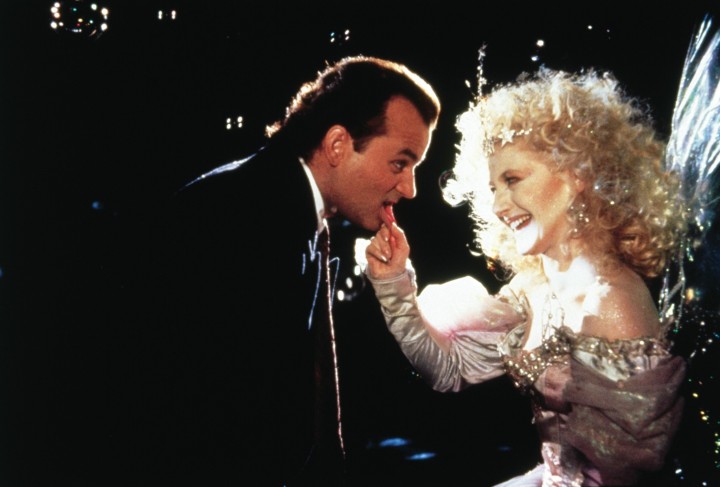 In A Christmas Carol, Scrooge is given lessons in life by three wise ghosts who attempt to change his heart by instilling him with wisdom. In this unusual adaptation starring Bill Murray, the ghosts straight up decide to get physical to get results. This 80s comedy finds Murray as a selfish television executive who can’t get into the holiday spirit, so three ghosts of Christmas past, present and future decide to teach him the meaning of the season, and are prepared to beat him with whatever kitchen implements are handy if he makes it difficult. Hey. If it works. This film loses the spirit of the original book, but replaces it with some genuinely funny humor that help keep this adaptation as fresh as the ice Murray needs to put over his black eye. It may not have the spirit, but it does have enough laughs to make this a worthy adaptation. 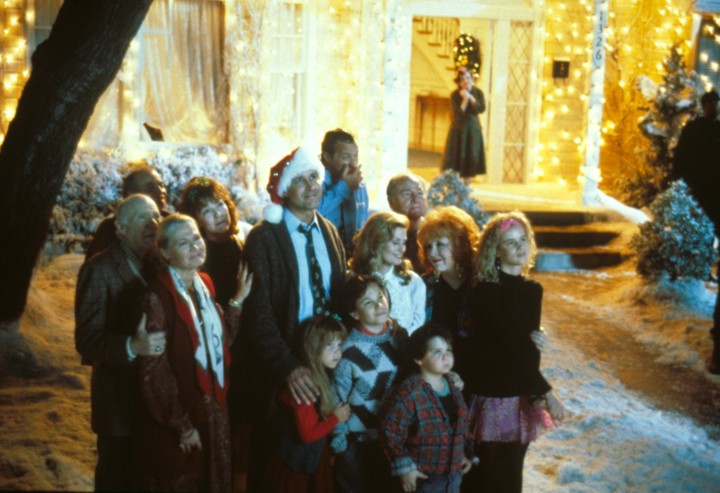 One of the best things about the holidays is family, except when your family sucks. Christmas Vacation is a holiday classic that dares to show just how horrible the seasonal family gathering has the potential to be. From the opening scene of getting a Christmas tree, the Griswalds just can’t catch a break. From them on they encounter one disaster after another, from setting the Christmas tree lights, to going sledding, but when other members of the family arrive, the party descends into what Clark Griswald describes as ‘the threshold of hell.’ Christmas dinner is a failure, relatives can’t stop fighting, the tree catches fire, and an evil squirrel goes on a rampage through the house. As the police finally descend on the house, we’re all reminded that while the holidays are great, it doesn’t take a lot to bring it all crashing down.

Gifts are a staple of the holiday season, and many of us have had some of our most cherished possessions come to us beneath Christmas trees. But what if you got a gift that was so bad, it literally wanted to kill you? That’s the plight the young hero in Gremlins finds himself, when his father brings him a seemingly cute little creature for the holidays. Eventually the creature multiplies, setting loose a slew of sadistic little monsters out to fill the night with murder and mayhem. Taking the spirit of giving and turning it into something deadly is about as anti-Christmas a message as you can get. Gremlins has a lot of Christmas in it, but its main theme of a gift gone wrong is perhaps something we can all relate too. We’ve all had a gift we found disappointing. Very few of us have ever gotten a gift that was actively trying to chop us up with a chainsaw.

Nightmare Before Christmas is a movie that both celebrates Halloween and Christmas, but one of the film’s more sophisticated underpinnings is that Christmas belongs only a certain time of year. Try to move it, and you bring it all crashing down. That’s the hard lesson learned by Jack Skellington, who tries to leave his Halloween roots in order to celebrate Christmas instead. Blending the two seasons together is a treat to see visually, but the chaos it unleashes takes everything special about the holidays and leaves it in tatters. Nightmare Before Christmas teaches us that all seasons have their own virtues, and perhaps their brevity is one of the things that helps us cherish them more. The film’s rich characters, beautiful animation, and memorable music all conspire to bring that theme to a vivid, memorable life. 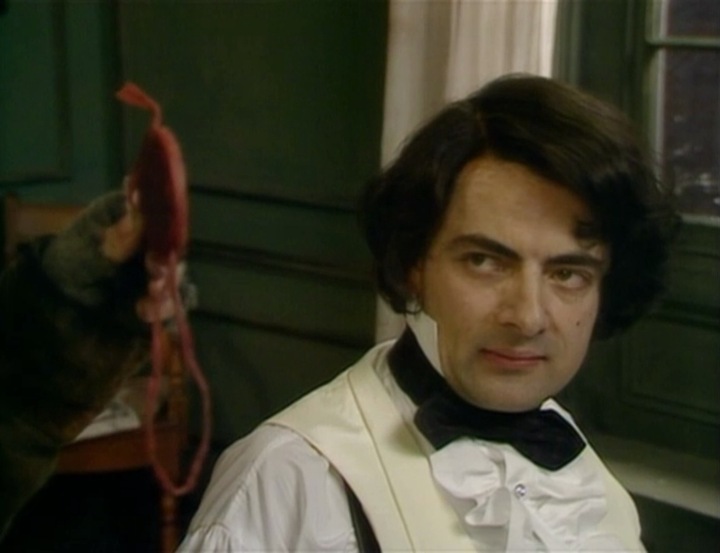 We’ve all seen adaptations of A Christmas Carol, and most of them, even the aforementioned Scrooged, follow the same beats of a selfish man learning to be charitable. What’s brilliant about the Blackadder adaptation is it goes the exact opposite direction. Blackadder, played by Rowan Atkinson, is generous to a fault, but after being visited by the spirits of Christmas, he learns that he’s been taken advantage of and slowly gains a new cynical attitude about life. By the end, Blackadder learns that if he’s extra selfish, his descendants will eventually rule over the universe itself, motivating him to become the greedy, cynical killjoy we all know and love. This film is an utter bastardization of Dickens’ classic book, but that’s one of the reasons it will have you rolling in the isles.

Kids love Santa Clause, but what would happen to someone if Santa Clause ruined their life as a child? Silent Night Deadly Night answers that question with the subtlety of an axe to the skull. On Christmas Eve, little Billy Chapman witnesses his parents get murdered by a man dressed as Santa, forever instilling him with a hatred of all things Christmas. When the now grown Billy is forced to don a Santa suit for his toy store job, he snaps, going on a killing spree to punish the naughty. Silent Night Deadly Night takes everything great about Christmas and turns it into something sinister, with people meeting their ends via Christmas lights and during sleigh rides. This 80s slasher is through and through a Christmas movie, capturing the feel of that special time of year. But with buckets of blood sprinkled on top, it can appeal to those of us who may just want the holidays to get over with.

Most people remember Bob Clark’s classic film, A Christmas Story, but not as many people have seen another holiday themed film he did long before, one that remains one of the most frightening horror films of all time. Black Christmas follows four sorority sisters who are enjoying the holiday and preparing to go home and see their families. They’re unaware that an escaped psycho has snuck into the upstairs bedroom of their house, and has a habit of sneaking downstairs to trim the tenant’s list. The cackling maniac is a truly disturbing character, and that the heroes are blissfully unaware of just however close he makes the movie all the more suspenseful. Black Christmas is not just one of the greatest horror films ever made, it’s one of the first ever holiday themed horror films, predating Halloween by four full years. Audiences were warned ‘If this movie doesn’t make your skin crawl, it’s on too tight.’ Even that fails to warn audiences of the gut-wrenching, and iconic, terrors to come.

There is more than one way to celebrate Christmas. Some may celebrate it with friends and family, with some nice food and gifts by a warm fire. But for those of us who want a little adventure, these movies will provide some nice alternative entertainment that’s funny, action-packed, and even scary. Christmas is one of the best times of the year, and as such, you should be able to enjoy it with any genre.

Like this article? Check out these other related pieces by some of our top contributors!