Triple Threat’s announcement in 2017 likely left some martial arts and action junkies curling their toes at what would have been dubbed as the “Expendables killer” if it were 2008 again. Because if anyone was refreshing their source of news to find Michael Jai White (Spawn, Black Dynamite), Iko Uwais (The Raid), Tony Jaa (The Protector), Tiger Chen (Man of Tai Chi), and Scott Adkins (The Expendables 2) to be co-starring in a film together, there would be no issues had with having a wave of high expectations. And this new but familiar era of action films shows that the genre does not have to be painted with a base color like most Jason Bourne, shaky-cam copycats are. You throw neon on the walls – you’ve got John Wick. A wall of dirty brown and red may be The Raid. Triple Threat is base white – basic.

Payu (Jaa) and Long Fei (Chen) are ex-soldiers that joins a group of mercenaries on a save-the-day mission to free prisoners on a remote village in Thailand. The film wastes very little time in setting up its catalyst: Deveraux (White) and co. is only there to save just one prisoner- Collins (Adkins), who is actually a mass terrorist. When the injustice is very clear to Payu and Long Fei, they’re swept under the rug and left to die in an explosion. But not all has been swept: the duo survives the betrayal (and explosion), along with a third-party villager named Jaka (Uwais), who witnessed his wife succumb to fatal injuries from the attack. Now it’s 5 vs 2 vs 1. What would you call this match setup in professional wrestling, a tornado tag? Had this set up lasted more than 20 minutes, it would have made for an interesting premise, but Triple Threat wouldn’t know what to do with that idea because it’s proven that it can barely handle its cast anyway.

The subplot with Tian Xiao Xian (Celina Jade) curing the world of corruption with her donations is obviously used as a breather for the intense action sequences but it’s all underwhelming…because the fights are underwhelming. The ‘ooh’ moments never come from hand to hand combat but weapons, like a knife tearing through the flesh and bone of a poor man’s neck. There’s a moment where Jaka gains control of a grenade launcher and what transpires after is some really impressive special effects. Bloody impressive. Jaa’s performance is disappointing because it’s a button mashing span of the same moves: kick, kick, knee kick. Most of the film’s choreography is just roundhouse kicks and slow motion of faces getting punched with blood spurting out. Shrug.

You don’t know us well enough to be making that kind of statement now, do you? *action noise* Now do you?

Michael Jai White’s lines were probably written by an online generator of anti-hero dialogue, but it wouldn’t be right to say that he couldn’t deliver them with some suave charisma. Hell, White is the only cast member with any charisma, but it’s difficult to tell if it’s a character development issue with the other actors (likely not, White is secret jack of all trades). Uwais is supposed to be vengeful and a fiery swindler that could find his way around country to make anyone regret throwing dirt his way. But his chihuahua snarl lasts shortly before misunderstandings turn into the power of friendship – huuyah! 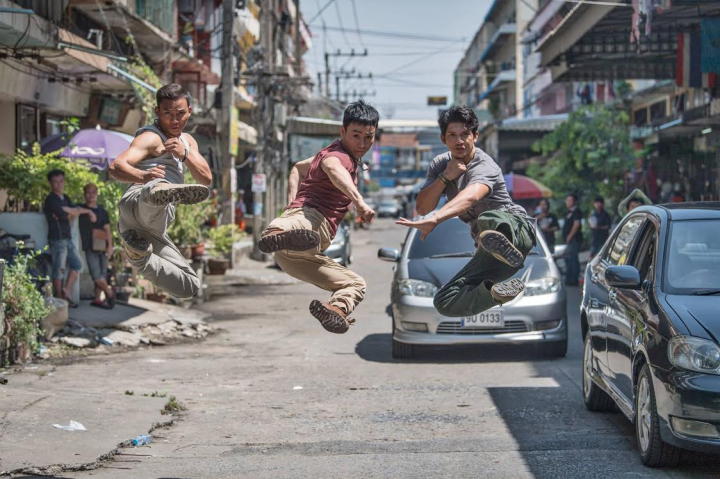 That’s the dumbest thing you could never live to regret.

Honestly, putting Triple Threat on fast-forward for about 15 minutes could be aching because what you see is characters on standby mode. The plot, the acting, the dialogue does very little favors from keeping these ass-kicking demigods from just whooping major butt – this is what audiences paid to see. The problem with Triple Threat is you can see the action but the film is shy of the attention. White and Uwais’ fight scene should have never been shared with an opposite shootout scene. It was a fight that could have had the same fun and weight as Rama vs Mad Dog in The Raid. Fight sequences are clear and steady and hooray but it’s only a sliver before its plot shoos it away. It’s the swimming after eating rule. You cannot do this when your plot is nonsensical collage of action tropes.

One thought on “Like Haze, This Isn’t A Killer: ‘Triple Threat’ Review – ScreenHub Entertainment”