Godzilla has quite an ensemble behind him in this year’s Godzilla: King of the Monsters. To those not familiar with the series, there’s still a lot to be excited about with this upcoming film. As a longtime fan, I can’t help but feel a surge of nostalgia seeing all the familiar faces these last few weeks. 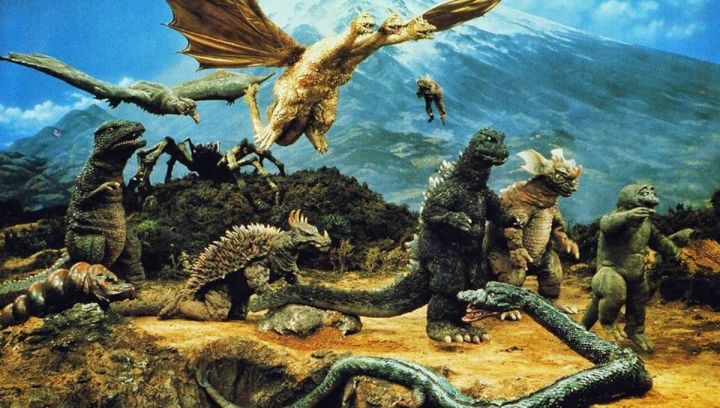 King Ghidorah, Mothra and Rodan have been a part of the series since its earliest days, and their involvement is always an event. So who are Mothra, Rodan and King Ghidorah? It’s actually quite complicated, as all three characters have gone through multiple incarnations over the years.

Godzilla traded hands multiple times throughout his life. The original era of films, dubbed the Showa Era, lasted from 1954’s Gojira until the 1970s, spanning an impressive 17 films. Up next was the Heisei Era, which boasted updated special effects and an overall more dire tone than the original series. This series panned 7 films (10 if you count the Mothra trilogy) lasting from the mid-80s to the early 90s. The Millennium Series came shortly after, lasting six films throughout the early 2000s. We’re currently in the Post Millennium Period, which encompasses everything after 2004’s Godzilla: Final Wars. Whenever Godzilla traded hands, the backstories of the characters changed as well.

See Godzilla: King of the Monsters in theaters! Save $5 on your first Atom ticket purchase by using the promo code SQUAD at checkout. 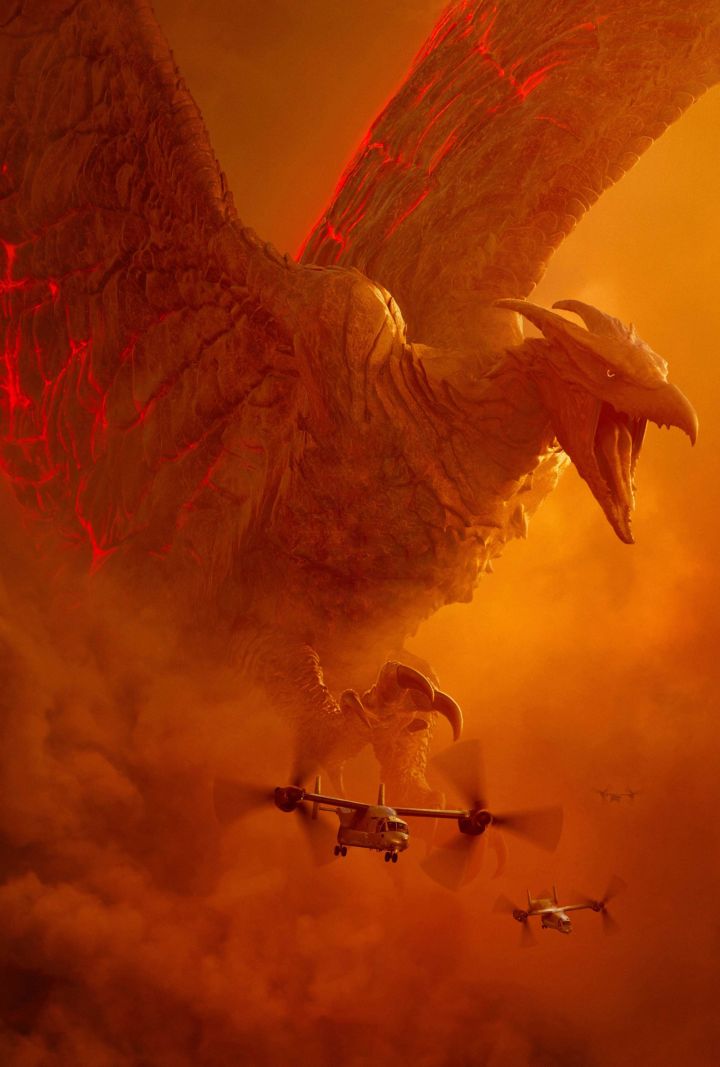 Rodan is one of the oldest and most popular characters in the Godzilla-verse. In spite of this, his appearances have been relatively sparse. Perhaps this is one of the reasons his return has been cause for much excitement amongst fans. 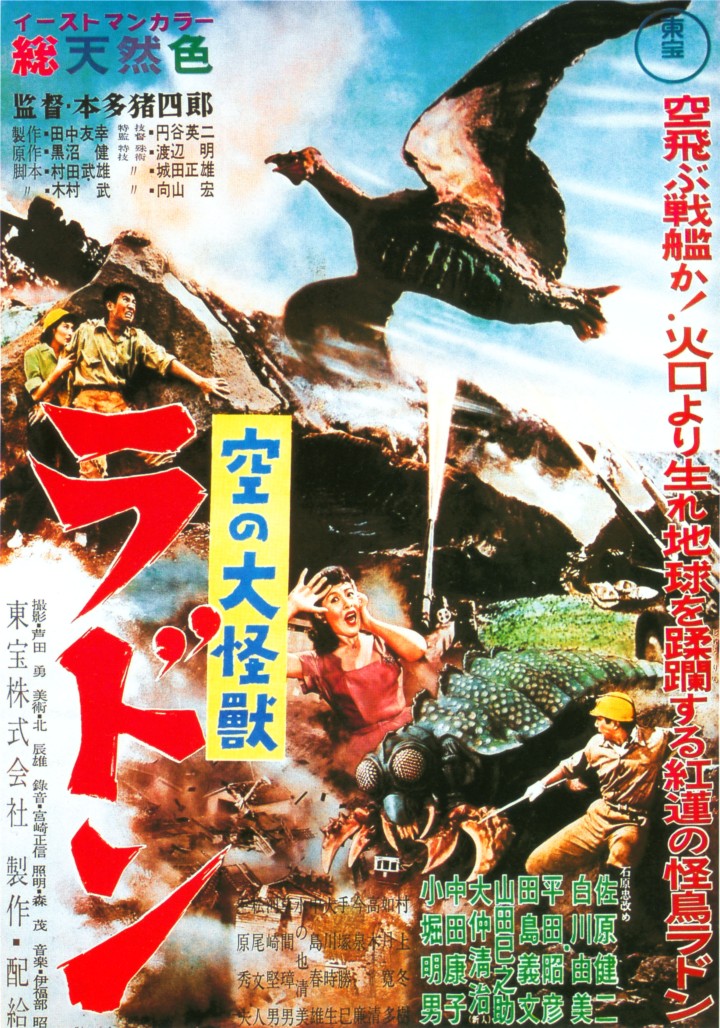 Rodan’s first film was the 1956 movie of the same name. In his native country of Japan, Rodan’s name is actually Radon, short for pteranodon. In this debut project, a pair of monsters are awakened by a mining project, and soon proceed to attack the whole of Japan. Eventually, one of the monsters is killed, while the second attempts to join its mate in death by flying into an active volcano. This film is significant not only for Rodan’s debut, but for also being the first Toho monster movie made in color. 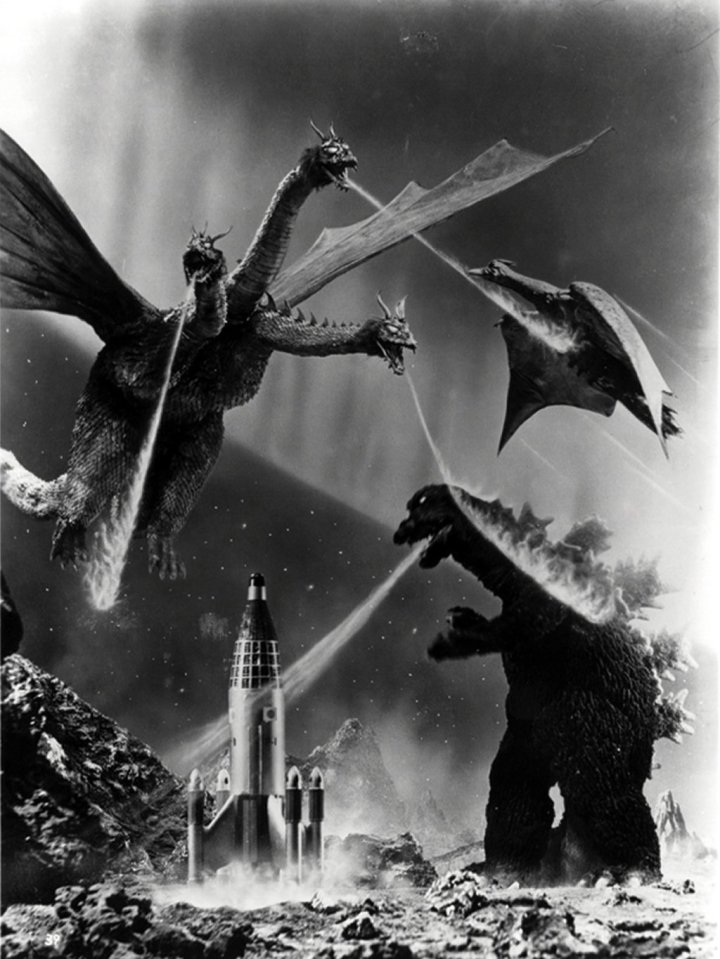 Though his original film in the Showa era was antagonistic, Rodan quickly took on a heroic role in Ghidorah: The Three-Headed Monster in 1964, where he aided both Godzilla and Mothra in fighting that titular monster. Rodan became something of a sidekick to Godzilla in this original era, helping his friend defeat Ghidorah twice more in Invasion of the Astro Monster in 1965, and Destroy All Monsters in 1968. After that, aside from stock footage, the character would remain unseen until 1993. 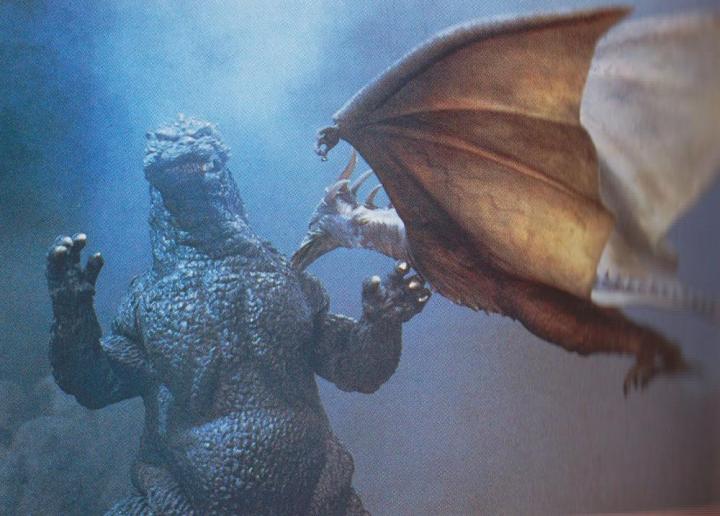 When it came to the Heisei Era, Rodan got little exposure. His sole appearance was 1993’s Godzilla vs. Mechagodzilla II, where he and Godzilla shared and interesting relationship of sorts. In this film, Godzilla places one of his eggs in Rodan’s nest, similar to how certain birds swap eggs to ensure the survival of their offspring. When the infant Godzilla is born, Rodan quickly forges a strong bond with it. Though they quarrel often, Godzilla and Rodan work tirelessly to defend the infant from various threats, a subtle recollection of their past partnership.

After an 11 year hiatus, Rodan returned to the big screen in 2004’s Godzilla: Final Wars. A modern-day counterpart to Destroy All Monsters, this film closed out the Millennium era with a resounding bang where various monsters from the franchise awakened to attack the world. Rodan would be the one to attack New York. After Final Wars, Rodan would once more take a long break from the big screen. 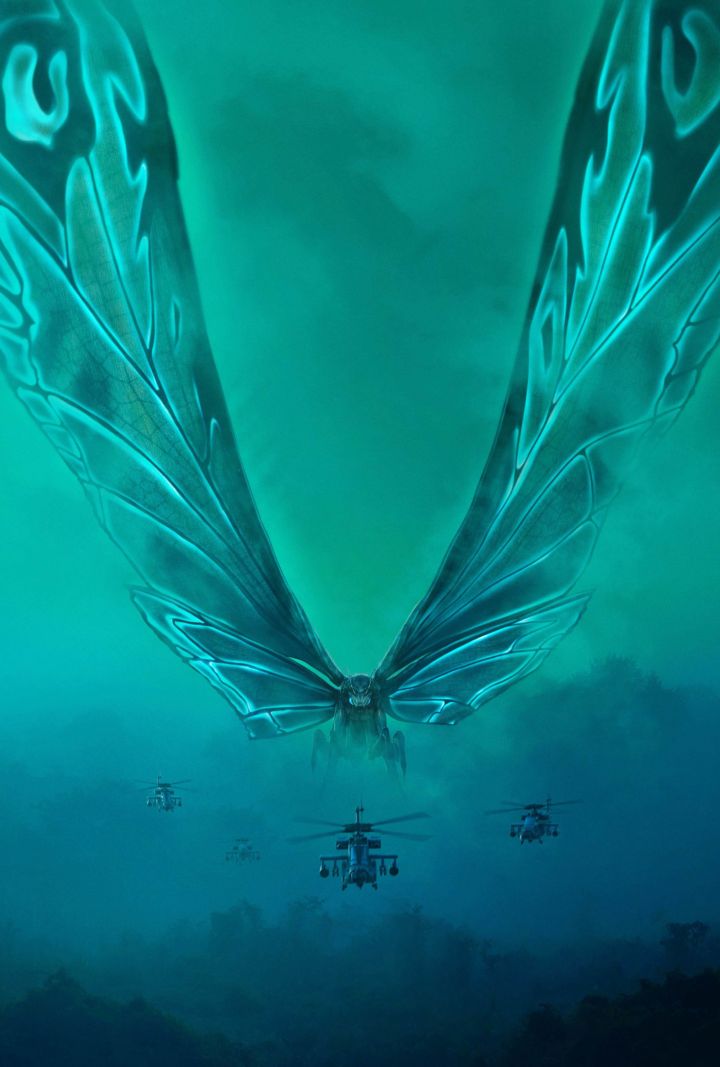 Though Rodan’s appearances have been sparse, the same can’t be said about Mothra. Second only to Godzilla himself, Mothra has enjoyed a wide and consistent screen presence since her 1961 debut. Unlike Rodan, Mothra has always been something of a protector to humanity. 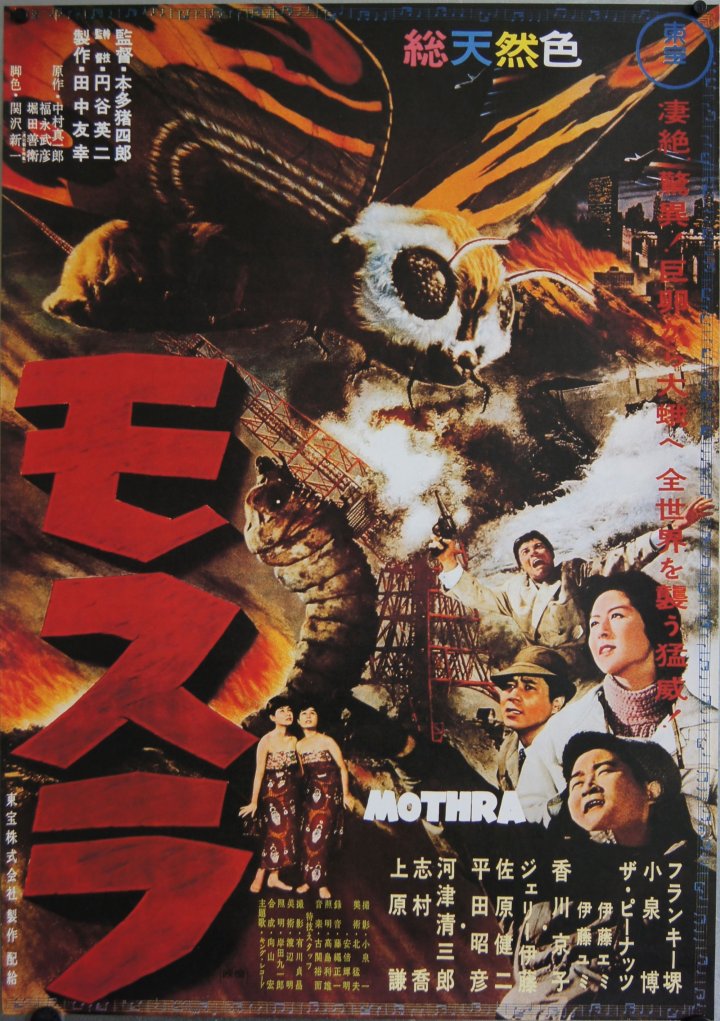 In the original Mothra, the massive insect acted as guardian to a pair of fairies. After the fairies are kidnapped by a greedy businessman, Mothra leaves her island home to come to their rescue. Though she causes much destruction, her motives aren’t malicious. Once her charges are returned to her, she departs peacefully. 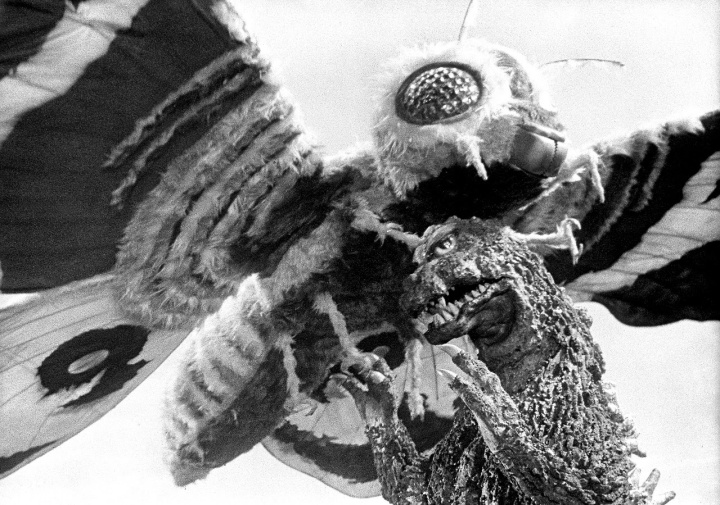 Mothra appeared shortly after in 1964’s Mothra vs. Godzilla. Here, the pair are at odds when Mothra attempts to protect her eggs from Godzilla, eventually sacrificing her life to save them. However, Godzilla’s victory is short-lived. When Mothra’s eggs hatch, her offspring are able to avenge their mother’s death and fight off Godzilla, making them the first monsters in the Toho library to protect rather than destroy Japan.

That same year, however, Mothra would have a pivotal role on Ghidorah: The Three Headed Monster. In this film, Mothra’s sole surviving offspring acts as a peacemaker, convincing both Godzilla and Rodan to aid in the fight against the invader. This single act would shape the rest of the Showa series, turning Godzilla into a hero. Mothra would act as a peacemaker and protector to mankind in a number of other films, saving the heroes in Ebirah, Horror of the Deep, and aiding in the battle of Destroy All Monsters. 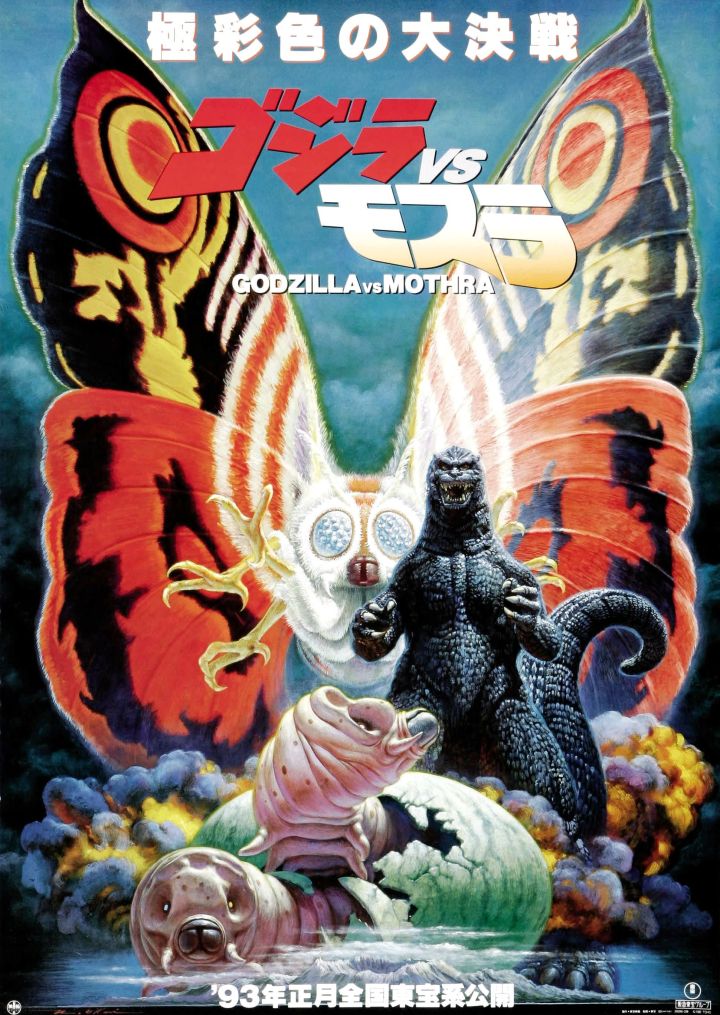 Though Rodan received little exposure in the Heisei era, Mothra was a different story. She would once more wage war with Godzilla in the 1992 film Godzilla vs. Mothra. Here, she was also a protector of mankind, aided once more by her fairy companions of the Showa era, along with a new moth creature named Battra. Mothra’s presence was so warmly received that she got her own trilogy of films that proved popular with family audiences throughout the 90s.

Mothra would later go on to make several significant appearances in the Millennium Era, though both were in different continuities. She fights hard to save mankind from Godzilla’s wrath in Tokyo S.O.S, Godzilla, Mothra and King Ghidorah: Giant Monsters All-Out Attack, and Godzilla: Final Wars. Throughout her long career, Mothra has perhaps been the most consistent and reliable creature in the series. Other monsters have been known to mix things up a little. 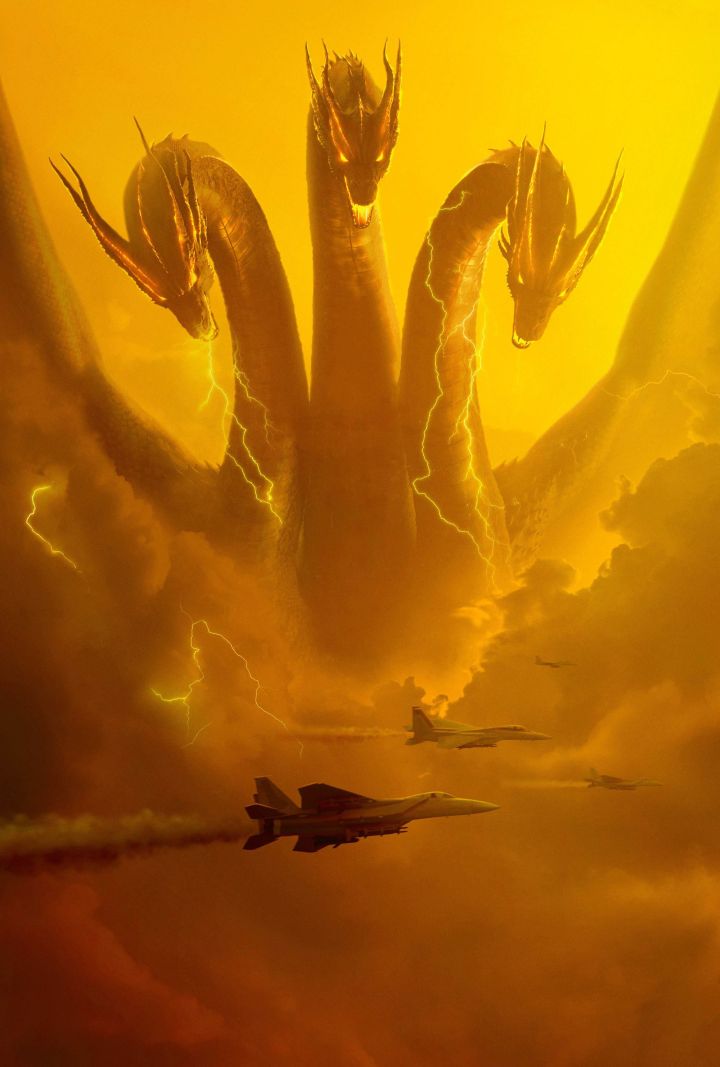 King Ghidorah takes up the role as the villain in this latest film, a role that he’s filled pretty well since his 1964 debut. Funnily enough, out of all the monsters on this list, King Ghidorah has perhaps gone over the most significant changes going from one studio to another, going through a variety of backstories and even taking up more heroic roles on occasion. 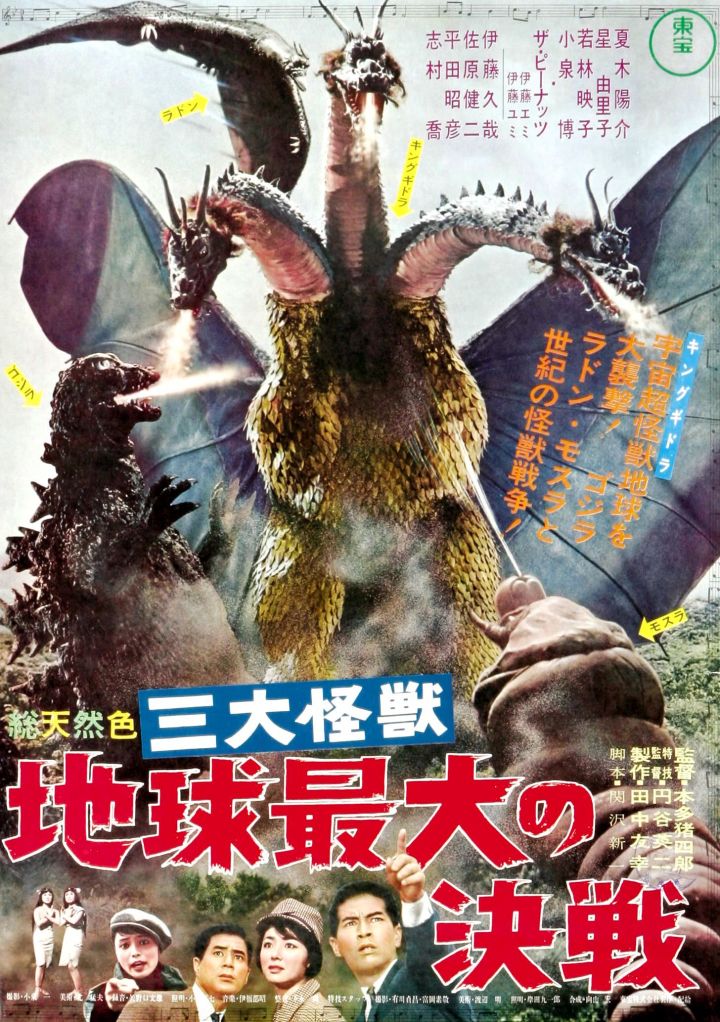 In Ghidorah: The Three-Headed Monster, the three-headed golden dragon is an alien life form bent on destroying mankind. Ghidorah proves to be a formidable foe that even the earth’s superpowers can’t defeat. it’s because of this that the plan to pit Godzilla and Rodan against him his formed, leading the other monsters down a more heroic path.

Ghidorah became Godzilla’s chief rival during the Showa Era, appearing in a grand total of four films in the original run. His last appearance was Godzilla vs. Gigan in 1972. 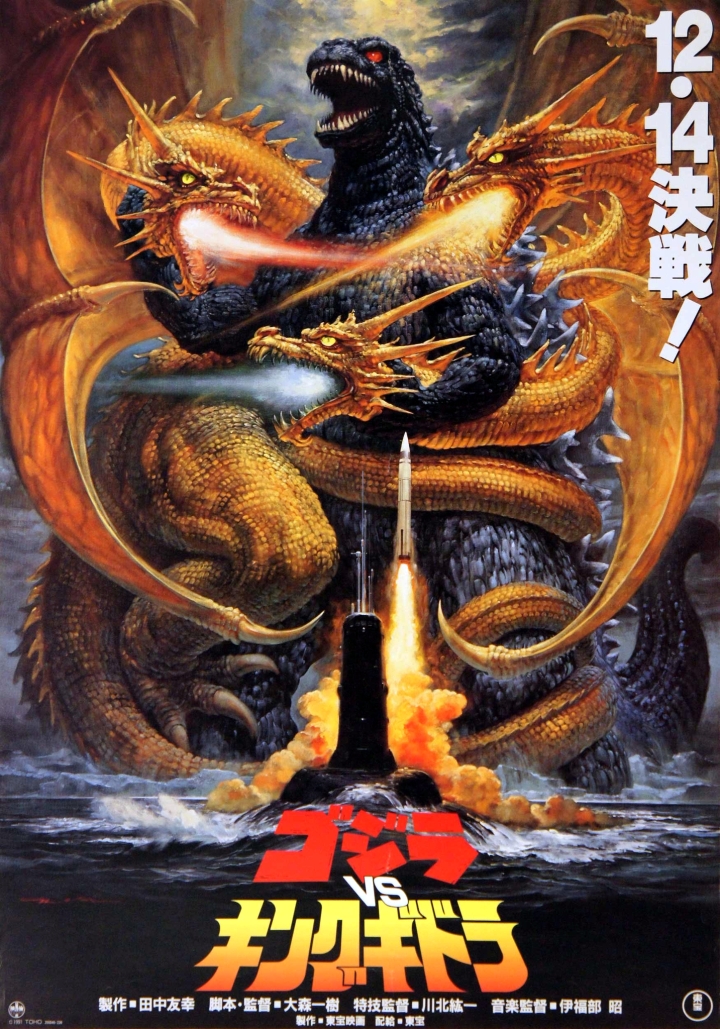 When he made his return in the Heisei Era, Ghidorah’s backstory was completely re-written. Now instead of an alien, Ghidorah was a monster created by time travelers intent on dethroning Japan as a superpower. Only Godzilla stands a chance to defeat the monster, which he does. Once that happens, Godzilla goes back to his old ways of destroying Tokyo, leaving a group of heroes to revive Godzilla’s rival as Mecha-Ghidorah in order to defeat him.

Watching Ghidorah go from a villainous role to a heroic one was one of the more unusual elements of this film, and one of the reasons it remains a fan favorite. Ghidorah would later appear in one of Mothra’s standalone films, his second and final appearance of the Heisei era. 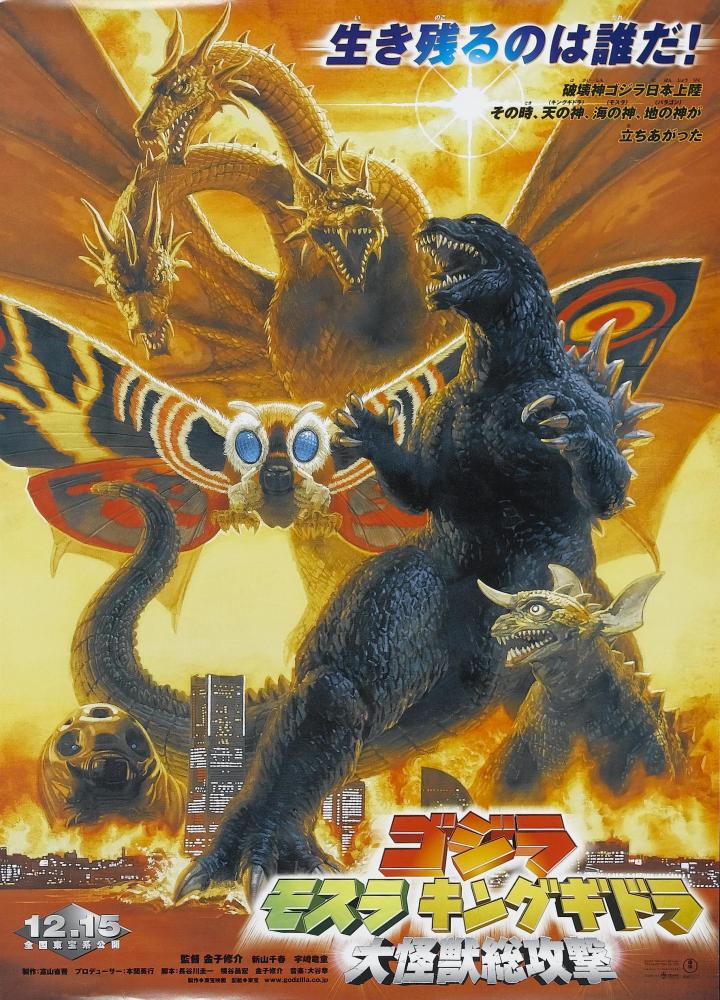 Ghidorah made two vastly different appearances in the Millenium Era, including perhaps his most unusual role. In Godzilla, Mothra and King Ghidorah: Giant Monsters All-Out Attack, rather than being an alien or a time traveller, Ghidorah was instead an ancient dragon spirit summoned to protect Japan along with Mothra. Ghidorah has a noticeably more mild appearance in this film, possibly because the part was originally intended for the Showa era monster Anguirus. Given Ghidorah’s popularity, Toho demanded his return.

His heroic turn wouldn’t last long. A four-legged variation of the character known as Keizer Ghidorah would serve as Godzilla’s final opponent in the Millennium Era swan song, Godzilla: Final Wars. After that, Ghidorah too would take a long break from theatrical films. That break ends next month. Godzilla: King of the Monsters marks the end of a fifteen year hiatus for all three characters, a no doubt historical occasion for longtime fans. 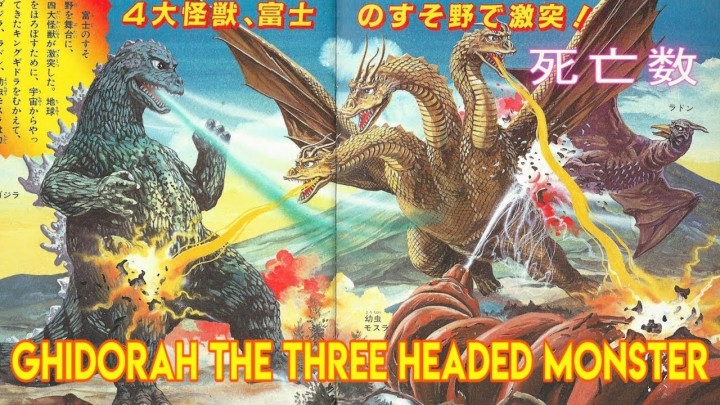 Godzilla has many famous co-stars, though few are as beloved as Mothra, Rodan and Ghidorah. Each character has a rich and diverse history, enough to earn them the title of pop culture titans. Next month, those titans will once more go head to head. I wonder how different these iterations will be from the previous ones. Will they be more like the colorful Showa Era, the darker Heisei follow up, or something else entirely? As a kid, few things captured my imagination as much as watching these four wage war. Waiting to see that again has been a long haul, but the haul is over.

I hope you liked this post and be sure to check out some more of our content at ScreenHub Entertainment such as my piece on Spielberg’s misguided war or our spoiler-free review of Avengers: Endgame.

2 thoughts on “Remember the Titans: A History of Godzilla’s ‘King of the Monsters’ Co-Stars – ScreenHub Entertainment”