(Disclaimer: This post contains spoilers for Westworld Season 1 and mild spoilers for Season 2. Also, none of this should be taken as fact as it is simply speculation)

Earlier today, we got a full trailer for season two of the HBO hit TV show Westworld. Aside from a short Super Bowl teaser, we have not seen or heard a lot about the second season other than that it will be bigger and better than the first. Premiering April 22, season 2 of Westworld stars Evan Rachel-Wood (Thirteen, The Idea Of March), Tessa Thompson (Thor: Ragnarok, Creed), Thandie Newton (MI:2, Crash), Jeffery Wright (The Hunger Games, The Manchurian Candidate), and Ed Harris (The Truman Show, Apollo 13) and is based on the book by Michael Crichton. In this post, I will be breaking down what we saw in the new Westworld Season 2 trailer and looking at how it may factor into the show. Also, at the end of the post, I will be explaining the secret trailer that founds found in the trailer and it’s accompanying meaning or the second season.

Probably the most exciting and important reveal in the trailer is Shogun World. In the finale of Season 1, we were teased with the reveal of Shogun World (top left) but in the trailer, we don’t just get to see the world itself, but we see Marvel (Newton) walking through it (presumably searching for her long-lost daughter but more on that later).

We also see a group of Samurai (bottom right). This could also explain why the Westworld hosts have gone to Shogun World. They could be enlisting the help of the hosts there in the battle against the humans and what is presumably an attempt to escape the park.

In an interview with the show’s writer, Jonathan Nolan, he revealed that Season 1 of Westworld was ‘ruled by order’ and the second season of the TV show will be instead ‘ruled by chaos’. In this trailer, we very much see this transition as a full-on war between the humans and the hosts can be seen.

In the above frames, we see Delos guards and military walking through a destroyed Sweetwater and planning an attack (left). They can also be seen, in the top right frame, to be at the location of the Delos meeting of the board of directors that ended in a massacre at the end of Season 1. This probably picking up immediately after the end of the last season and will probably open the show (or at least be in the first episode).

It looks like, judging by the trailer, we will be seeing a lot more of the ‘real’ world (being not in a park) and the incomplete hosts (right) will act as henchmen to the hosts. The more interesting thing about the ‘real world’ scenes, however, is that Evan Rachel-Wood’s Delores is wearing modern dresses.This could be her going undercover to infiltrate the high-up people in Delos (those who are left, anyway) or it could be in the earlier timeline in a situation where she is still a host but being used in a more Blade Runner-style situation (providing a service to the humans, like we saw some hosts do in the Delos HQ in Season 1).

One thing that we know will be majorly different in Season 2 is the stakes. In the first season, there was not a lot to be worried about in the way of character deaths (with the host characters). This, Of course, has changed completely as the bodies of hosts will no light never be simply taken off and fixed (unless the hosts learn how to do it). Also, the goal will be more important. We will see the hosts fighting for their lives and for their freedom instead of, as we saw in Season 1, a simple search for something.

Thandie Newton’s Maeve was fairly minor in Season 1 but was easily one of the more riveting characters with the most intriguing backstory. It looks like her backstory will be explored in Season 2 as she looks for her long-lost daughter, likely leaving Westworld to enter Shogun World.Also, it looks like she will be doing a lot of travelling throughout the season as we see her with Simon Quaterman’s Lee in the Westworld HQ, with Delores at the Civil War location, and in Shogun World.

The last we saw of Logan in Season 1, he was tied naked to a horse in the desert in the middle of Westworld. In this trailer, however, we see him picked up by a Native American host and later back in the human world. This is, of course, in the earlier timeline in which the hosts cannot be killed, so it will likely not take him long to become prominent in the running of the park due to his brother-in-law’s actions. Also, it seems like it won’t be taking him long before he enters the park again (bottom right).

The Creation Of Bernard Lowe

We see a lot of Jeffery Wright’s Bernard in the trailer but, we don’t really see anything interesting. We do, however, see a few of the previous models of him. This means that we will probably get some plot twists with him involving duplicates and might look at the reintroduction of Anthony Hopkins’ Ford (as Bernard was the first host based on a human as far as we know).

The Man In Black And Teddy

The final two characters I am going to talk about are the Man in Black (William) and Teddy. First off, it looks like Teddy will be taking a bit of a backseat this season and will probably become more of a minor character as others such as Maeve or Tessa Thompson’s Charlotte Hale fill in.

Secondly, the Man in Black would seem to be fighting on the side of the hosts as he talks to Delores in the top right frame. His wish has finally come true as the ‘stakes are real’ and it looks like he will be helping them escape Westworld (though a younger William may still be up to some violent mischief in the earlier timeline). 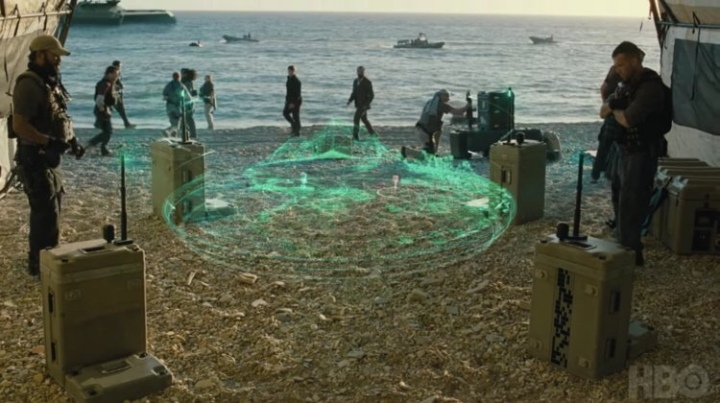 Now for what you are here for: the secret second trailer! In the above frame, the small box on the right may just look like it has a random pattern on the side. This, however, as a group of fans has discovered, is binary code that leads you to an otherwise inaccessible page on the Delos Inc. website. This page has a video on it that is a real-world advertisement for Delos and Westworld. It mostly shows footage from Season 1 mixed in with some smiling models and some creepy glitches that show some already-released scenes from the first trailer and the Super Bowl teaser.

This tease does not show us anything of use other than one small clip of a very beaten-up Delos founder who you can learn more about on the Delos home page (above). It does, however, show us, at the end, a short code (Xomegach) that, if imputed into the login box in the top right-hand corner of the site, leads to a VR-style empty white room with some blue dots in (below left). One of these dots, when clicked, lead you to another video, which simply shows a screen of code being typed out as Charlotte Hale (Tessa Thompson) searches for Peter Abernathy (Delores’s father from the first season). This cannot mean much other than that Mr Abernathy will be making a return and Hale will be a more important character in the second season (as was previously speculated anyway). This room will likely be populated with more and more dots over the coming weeks until the show begins (or maybe even until the finale).

Season 2 of Westworld will likely see an all-out chaotic war between hosts and men as they true to escape the park. Also, we will likely see Tessa Thompson’s Charlotte Gale and Thandie Newton’s Maeve take more prominent roles as the latter searches for her daughter and answers to her past.

Also, in the above frames, we see a returning host character from season 1, the creation of some sort of red sphere, and a host looking at something in the real world (though we cannot see what it is). Let me know in the comments what you think these might mean for the show. Also, be sure to check out my article on HBO and Netflix providing a home for intellectual science fiction and my review of Wes Anderson’s Isle of Dogs.