In the late 90s, it seemed like you couldn’t escape Hollywood’s fascination with Michael Crichton. While not the first adaptation of his writing, the obsessive author became a box office darling after the release of Stephen Spielberg’s version of his novel Jurassic Park. Amid this flurry of cinematic success, the world was introduced to The 13th Warrior. Plagued by production problems, and a truly brutal thrashing by critics, to this day it rarely gets the respect that it deserves. Here are some of the reasons The 13th Warrior is one of Michael Crichton’s greatest adaptations and a true forgotten classic.

The Journey of The 13th Warrior

Both the film and the novel it is based on merge two historically important texts, the Old English epic poem Beowulf and Ahmad ibn Fadlan’s real-life account of the Volga Vikings. We are first introduced to the protagonist Ahmad, a Muslim Arabian nobleman, exiled from his homeland. In his travels he encounters a group of nordic traders and, amid a particularly intense pagan ritual, is involuntarily recruited to go with them on a dangerous mission against an ancient enemy. Ahmad, who is neither a warrior nor an adventurer, is suddenly swept up in a world that he does not understand, fighting a foe that he isn’t even sure he believes exists. 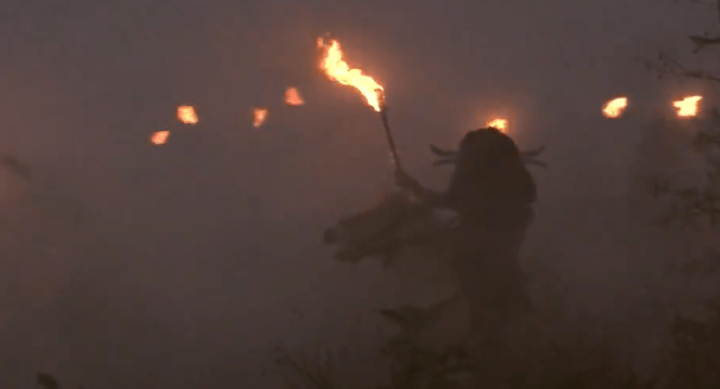 Faithful to the Source

Today it can be difficult to separate the author, Michael Crichton, from the many films that bare his name. Whether it be a masterpiece of movie magic or a mangled cinematic mess, the film adaptations of Crichton’s novels have rarely stuck to the author’s vision.

The 13th Warrior is a notable exception to this unfortunate trend. The film is based on the novel Eaters Of the Dead. A novel that, according to his official website, Crighton admitted he wrote on a bet.

“The short version is, I wrote Eaters of the Dead on a bet that I could make an entertaining story out of Beowulf.”

Crichton was heavily involved in the project, even stepping in to direct when the studio became unhappy with the credited director John McTiernan. Though changes were definitely made, The 13th Warrior would become one of the truest adaptations of a Crighton novel. The author himself said this about the film:

“I’m quite pleased with the movie (13th Warrior), which I think captures the feeling of the novel very well.”

The 13th Warrior, and its source material, sit solidly in the genre of historical fan fiction. It won’t be winning any historical accuracy awards, fir a lot if reasons. There are some points, however, where the film hit the nail on the proverbial head. In spite of some geographic and armament inaccuracies, to this day out is one of the most grounded and honest depiclikes of ancient Norse culture in mainstream cinema. Though the North Men are first depicted as violent and unclean, as the film goes on they are revealed to be intelligent and sophisticated. The filming location of British Columbia serves as an accurate substitute for the Scandinavian wilderness. Even seemingly inconsistent things, such as the strange mix of accents among the North Men, would have been accurate to the time due to the advanced trade and travel networks that the Nordic people had established.

One of the greatest strengths of The 13th Warrior is its insight into the immigrant story. The movie flips this relatively common trope on its head. We see a reluctant traveler forced to adapt to a completely foreign culture or die. 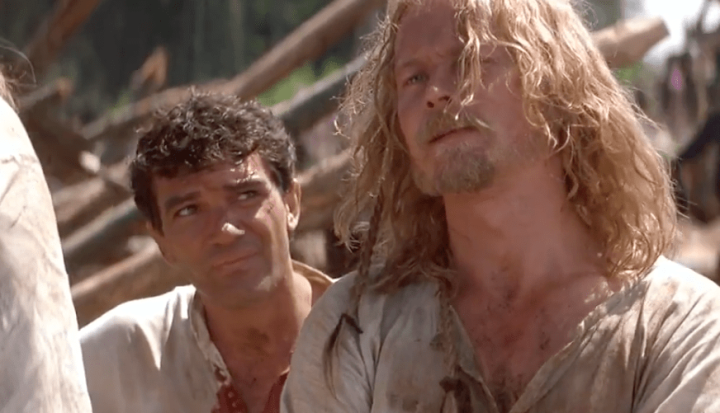 When we are introduced to Ahmad, we see him as a noble and refined character. The North Men, on the other hand, are introduced as vulgar, unclean, violent, and uncivilized barbarians. As he is forced to travel with them he must learn their language, their faith, and their warrior’s code. Ultimately their bravery, cunning, and honor shine through. We can literally see his transformation as he sheds his traditional Arabic robes along with his preconceived notions. Eventually, Ahmad is able to put aside his prejudices and stand beside his new comrades in battle, proud to be counted among them.

One of the more interesting cultural moments in The 13th Warrior occurs early in the film. Our reluctant hero Ahmad has been pulled along on a dangerous journey with the brutish North Men without any means to communicate. Though their speech is foreign to him, over time he is able to acquire enough of the nordic language (in this case Norwegian) to hold a conversation.

The way that acclaimed director John McTiernan chose to depict this transition in The 13th Warrior is brilliant, if flawed. As the journey goes we are shown a series of spirited conversations between various North Men. First, these exchanges are all in Norwegian, then bits of English (substituting for Arabic) are interspersed into some sentences. Shots are repeated with closeups on the North Men’s mouths to represent Ahmad’s focus on observing their speech. We get to learn with Ahmad. The only flaw in this depiction is that, though the journey would have taken months, the film makes it look like only a few days pass. Professor Michael Livingston of The Citadel in Charleston, SC says this about The 13th Warrior‘s representation of immersion learning:

“Some reviewers gripe about this sequence, complaining that you can’t learn a language so quickly. To that, I say that no, apparently ‘you’ can’t. But some folks over the course of a week of immersion really can pick up more than enough to get by.”

There is no getting around it, The 13th Warrior was a phenomenal flop at the box office. Aside from budget overruns and delays, It was absolutely trashed by critics at the time, many complaining about the level of violence (ironic, as The 13th Warrior would be considered rather tame by today’s standards). Roger Ebert gave it 1.5 stars and complained:

Not everyone despised the film. There were the occasional less than horrible write-ups, like this from The Washington post:

“The summer’s primo guilty pleasure… red meat for the soul”

Even I won’t claim that The 13th Warrior is a perfect film. No, Antonio Banderas is not Arab. It suffers from a sometimes painful case if 90s cinematography. In the time of “Me Too” and “representation matters”, it is definitely worth noting the distinct lack of any meaningful female presence. Possibly due to the budget and directorial complications, the film does seem to speed through some major plot points and could probably have used another hour or so to flesh out the details (especially in the beginning).

The 13th Warrior has been abandoned by its studio, forgotten by the public, and beaten to a bloody pulp by its detractors. Despite this, should you be able to seek this film out, you will find something very special. Even with all of its flaws, The 13th Warrior remains a guilty pleasure, a criminally underrated gem, and for a select few, a truly forgotten classic.

Do you secretly love The 13th Warior?

Find more hidden gems and well known classics from this and other ScreenHub authors!

‘Terminator: Salvation’ is Better Than You Remember – ScreenHub Entertainment