In October of 2016, the TV series Westworld made its debut on HBO. It quickly became HBO’s most-watched first season program since True Detective, getting both critical acclaim and consistently high ratings. The second season has been in production for almost a year, and we just got a trailer. So while we’re waiting, might I suggest watching the classic on which it was based? The original Westworld remains one of the best and most influential films in the genre. Like the series, it tells of the Delos resort, an android populated theme park including simulations of the old west, Medieval and Roman times, where guests are allowed to live out their every fantasy. Soon, however, the androids run amok, sending the park into chaos. One man finds himself pursued by the park’s star attraction, an android gunslinger who will not stop until he gets his man.

Westworld was written and directed by Michael Crichton, who would later go on to write Jurassic Park. After proving he knew how to use a camera as well as a typewriter, he was given the opportunity of a lifetime. Crichton was offered the chance to write and direct his first film for the big screen. It was a dream come true for Crichton, but he curiously didn’t want to work in science fiction for his first big feature.

“That’s the only way I could get the studio to let me direct. People think I’m good at it, I guess.”

According to Crichton, all aspects of production were a very difficult affair. It was so difficult that after the release of the film, he didn’t direct another movie for five years before focusing more on the written word. In spite of this, Westworld proved a massive success, becoming MGM’s biggest moneymaker of that year.

Westworld was highly influential on Crichton’s future career, serving as the template for his most well-known work. Jurassic Park and Westworld feature virtually identical plots, elaborate theme parks where the star attractions break out and harm the guests. The two even both feature an iteration of the Tyrannosaurus Rex.

Westworld is perhaps best remembered for its villain, the android Gunslinger played by Swiss/American actor Yul Brynner. The Gunslinger is the star attraction at Westworld, much like the T Rex in Jurassic Park. He is programmed to be the classic old west villain, seeking out and harassing guests so they may have exciting showdowns. However, the Gunslinger soon starts outdoing his human opponents, resulting in their deaths. When only one man remains, the Gunslinger, as per his programming, pursues him across the park until their duel is completed.

The chilling nature of the character is due in large part to Brynner’s impressive performance. The Russian born actor was one of the most successful actors working in Hollywood at the time, with impressive credits such as The Ten Commandments, The Magnificent Seven, and The King And I, for which he received the Best Actor Oscar at the 1957 Academy Awards. It was his performance as the heroic Chris Adams in The Magnificent Seven, however, that really paved the way for this role.

Brynner’s appearance in both The Magnificent Seven and Westworld is virtually identical, the actor possibly carrying over his leftover costume from the earlier film. He also carries over Chris’ stoic and intimidating nature that would have made him the villain of any other film. One of the few things that set Brynner apart from the earlier role is his eyes. For Westworld, Brynner wore a pair of silver contact lenses. The highly reflective lenses caught the light in a very unnatural way, almost appearing like they were glowing. He looked less like a man and more like a cat ready to pounce. 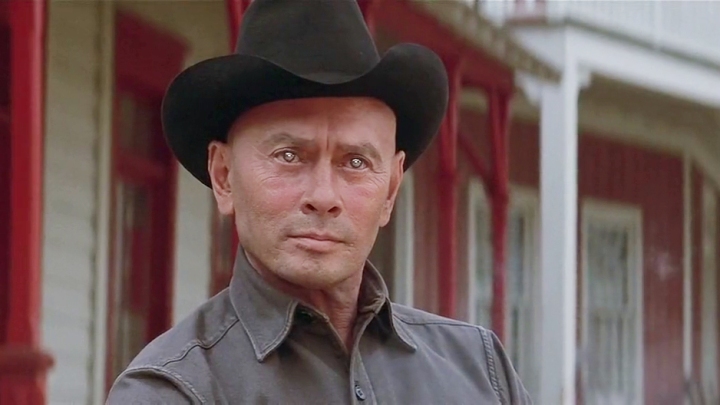 When the androids finally run amok and rampage through the Delos resort, Brynner becomes something quite frightening. His dialogue ceases, his movements become very methodical and precise, and he never, ever stops. Even when he leaves the Westworld portion of the park, going to segments based on Roman and Medieval times, the Gunslinger shows zero interest, focusing only on tracking down his frightened target. His final line is spoken some forty minutes before the film ends, lighting the fuse to one of the most suspenseful pursuits ever put to film. 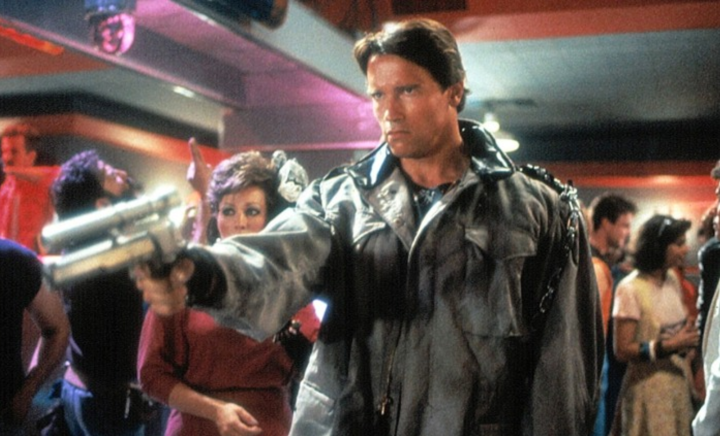 Westworld was one of the most popular films of the time detailing the dangers of technology, and its portrayal of hyper-realistic androids became a template for many future works of science fiction. The portrayal of androids that appear human may not have originated in this film, but Westworld popularized it like never before. That template has since been adapted into a variety of other works such as Star Trek and the Alien series. Most significantly, Brynner’s relentless portrayal as the Gunslinger was the primary inspiration for another unstoppable robot, the main antagonist in the 1984 classic, The Terminator.

The character’s almost indestructible nature may have also influenced the slasher genre, birthing such characters as Michael Myers and Jason Voorhees of Halloween and Friday the 13th who keep coming back no matter how many times they are ‘killed.’

The 1973 film is also the first to employ the use of computers, using digital processing to create the pixilated point of view shots of the Gunslinger. It was Crichton’s idea to use this technique to put us in the mind of the film’s villain.

This was a revolutionary process at the time that had no prior precedent. When Crichton suggested this to his team, they were completely lost as to just how to do it.

“Such a process had never been used for motion picture films before, and none of the special-effects houses even knew what we were talking about.”

Crichton went to the Jet Propulsion Lab in Pasadena California, who completed the process in nine months. The technicians had to convert over 2880 individual frames, or around two minutes of film. No one could have known it at the time, but this was the beginning of a special effects revolution, one that would poetically reach another milestone when Steven Spielberg used computers to bring another Crichton story to life.

The Gunslinger’s POV also influenced another character. Later in the film, his eyes are destroyed but he still has his heat sensors to locate the hero. Thus we are treated to an impressive infrared vision effect during the final showdown. These shots were the obvious inspiration for Predator, where the alien hunter stalks his victims using the same thermal imagery.

While the film explores different themes than the original, it does still delve into some very interesting ideas. The first is the dangers of technology. The characters of Westworld are clearly playing with fire, but are assured that nothing can possibly go wrong. Even when the androids begin to behave strangely, from a rattlesnake successfully striking a guest to a model built for pleasure refusing someone’s advances, they don’t take the threat seriously until it’s too late. 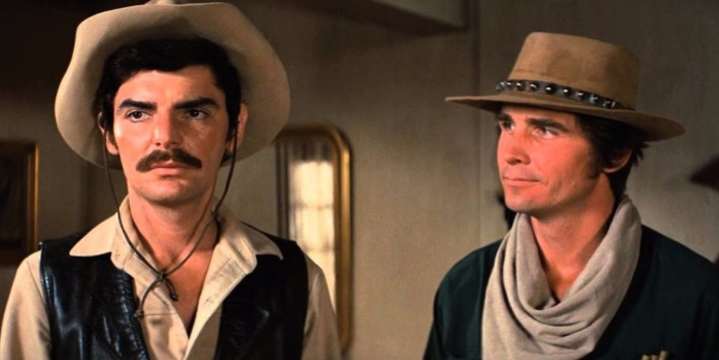 Another theme is wealth. The Delos resort in the film is catered specifically to the super rich, costing guests a thousand dollars a day even in 1973 dollars. Most of the resort guests are portrayed as privileged, clueless, even sleazy. James Brolin’s character of John, for example, is a repeat customer at the park. John treats the entire stay like a game, convinced of his invulnerability to the park’s very real dangers. Only the film’s hero goes against this trend.

The main character of Peter is uneasy from the beginning, expressing worries about the park’s issued firearms while other guests recklessly play with them. He is also not as rich as the other guests, John paying for his trip. Since Peter isn’t as rich, he hasn’t lived as privileged a life as everyone else staying at the resort. Having lived a much harder life, Peter fights much harder to survive when everything goes wrong.

By far the biggest theme in the film is the dangers of corporate greed. After an android refuses the advances of a guest, one of the lead technicians says the park should be shut down before things get worse. This idea is quickly dismissed by the big wigs, who in order to protect the resort’s reputation, only agree to shut down after the current guests have left. For the sake of financial gain and publicity, they throw their guests to the wolves.

Their greed ends up sewing the seeds of their own destruction. In order to cut costs, the park was run with a centralized computer system, which itself breaks down along with the androids. The executives and technicians are sealed inside airtight rooms when the ventilation system fails, leaving them to slowly suffocate. The film ends with the final haunting image of Peter lamenting at the irony of the Delos slogan, that seduced him to what turned out to be an elaborate death trap.

“Boy, have we got a vacation for you!”

While Westworld was a hit, the franchise faltered shortly after with a bungled sequel and a TV series that barely lasted a season. However, the success of Jurassic Park rekindled interest in Crichton’s earlier work. For over ten years, people were talking about revisiting the Delos resort, with a remake even in the works starring Arnold Schwarzenegger that fell through. Those plans were finally realized with the series on HBO.

The success of the TV series has proven this franchise is as relentless as the original Gunslinger. Even after seemingly being put down for over forty years, it shows no signs of stopping.

6 thoughts on “While Waiting For Season 2 of ‘Westworld,’ Check Out the Classic That Started It All – ScreenHub Entertainment”