As a kid, it seemed I couldn’t pop in any movie without hearing a reference to Rambo. True Lies, UHF, Spaceballs, Hot Shots: Part Deux and others painted a picture of an unstoppable titan who did away with his enemies by the truck load. To me, this is one of the most infuriating misconceptions of popular culture, as the original First Blood is hardly what one would call an injection of testosterone. Instead, it’s one of the most tragic, contemplative and emotionally powerful films of its era.

The character of Rambo has come to be viewed as the archetypal action hero. Mention of the name will conjure up images of a ludicrously muscular mountain slaughtering untold amounts of nameless villains. It’s a reputation that was forged in the sequels. 1982’s First Blood on the other hand is another film entirely. 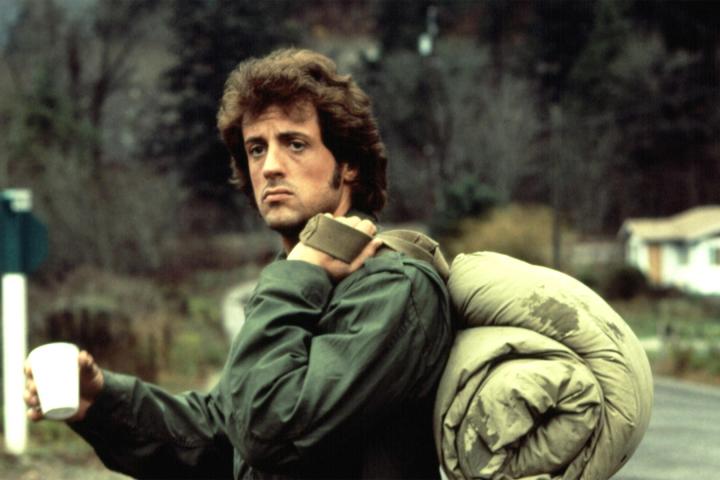 First Blood finds Rambo not as an action goliath, but a lonely drifter. After learning of the death of a close friend, the already unhinged Vietnam Veteran finds himself in Hope, Washington where he’s arrested and subsequently brutalized by the local police. The abuse sends Rambo careening over the edge, leading to a daring escape into the surrounding wilderness. The police organize a manhunt to track him down, pushing Rambo further away from civilization, and closer to his lingering memories of the war.

The first major difference between First Blood and its sequels is the genre. With the exception of a few well crafted sequences, First Blood is not an action film. Instead, the film is an exploration of trauma, and a character study of a man with deep psychological scars. The sequels are all about Rambo’s heroics. First Blood is about Rambo’s suffering.

Most action films tend to build their heroes up until a rousing final act. First Blood by contrast seeks to systematically rip Rambo apart. It’s a pattern evident from the very first scene. The film begins with a hopeful, even optimistic Rambo having sought out the home of an old friend in the hopes that he can get back on his feet. It’s the happiest Rambo appears in the film, and it’s painfully short lived. Upon hearing of his friend’s death, this hopeful scene turns into one of despair. It sends Rambo down a desolate road away from civilization and into the heart of his trauma. 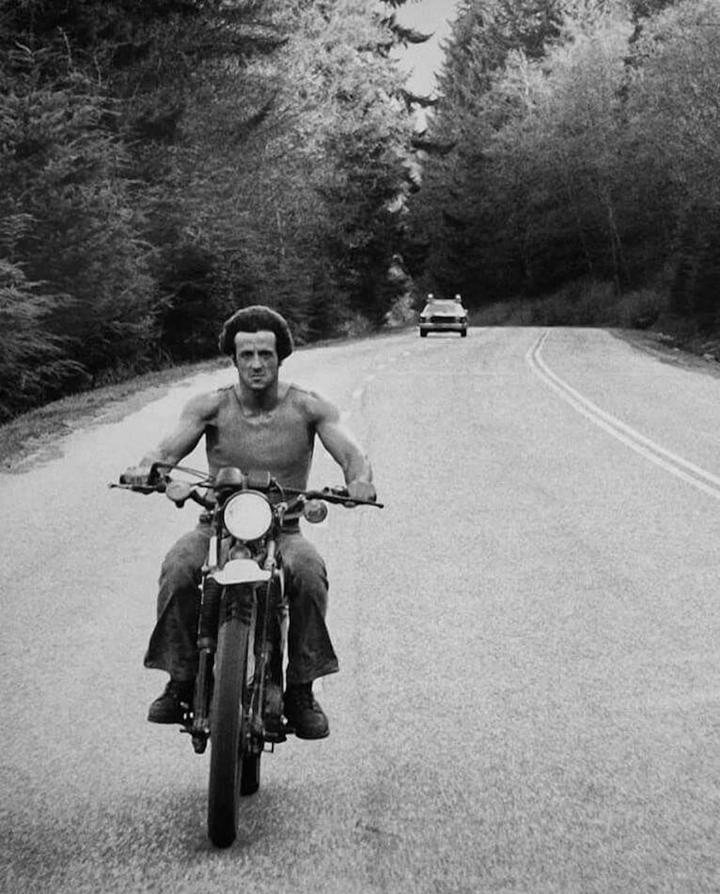 Seeking refuge in the town of Hope, Rambo only finds hostility. After a chance encounter with the local sheriff, Rambo finds not kindness, but condemnation. His search for refuge thrusts him into a prison cell with a group of overzealous cops. There, he suffers abuse that further dredges up his painful memories of torture he endured during the war. Following a vivid flashback, Rambo fights his way out of the police station and escapes into the wilderness, sparking a massive manhunt.

Instead of fighting a war in a far off land, Rambo finds himself fighting against his own countrymen in a desperate bid to escape. By every little encounter and skirmish, the broken soldier is pushed further and further into madness, until he’s finally cornered in a dark underground cavern, frightened, alone, and ready to destroy everything in his path when he finally escapes. 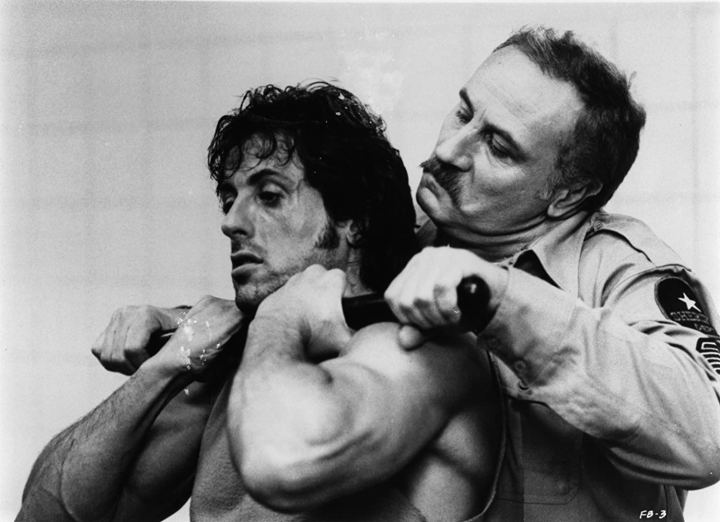 All authority figures in First Blood land somewhere between inept, incompetent, and outright cruel. Throughout the film, Rambo is failed by those he’s supposed to trust. This first becomes evident through Rambo’s treatment by the police, where the compassion he needs is traded for mocking contempt. It’s only a matter of time before this takes a dangerous turn. 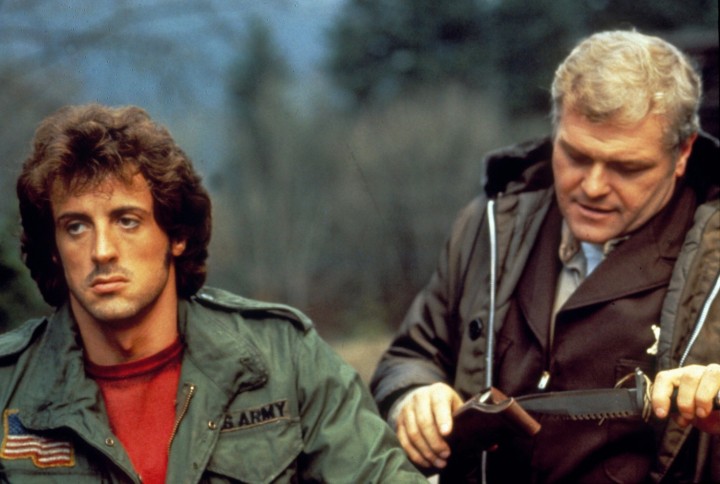 The main antagonist of the film is Sheriff Teasle. Teasle, himself a veteran, shows perhaps the greatest contempt for Rambo. Though Rambo’s clothing distinguishes him as a fellow soldier, his disheveled appearance only serves to anger Teasle. He criticizes Rambo for being a drifter, and even goes so far as to bar him from eating a meal in Hope. Teasle’s stubbornness and lack of compassion make an already volatile situation even worse, and effectively set the events of the film in motion.

The National Guard is similarly inept. In spite of their orders to capture the soldier alive, the gang of weekend warriors instead attempt to kill him right from the start. After cornering him in a cave, and in spite of him being helpless, the soldiers attempt to kill him with a rocket launcher, thus burying him alive and further aggravating the situation. The incident disorganizes the authorities, leaving them vulnerable when Rambo inevitably escapes his tomb.

Arguably the most ineffective figure in the film is the one who Rambo should trust the most, Colonel Trautman. Trautman is the only one who understands how skilled Rambo is, and criticizes Teasle for how his men handled the situation. Yet Trautman is as responsible for Rambo’s condition as anyone. Conversations between him and Rambo reveal he was inattentive after the war, never hearing Rambo’s cries for help and even being unaware of the death of Rambo’s friend, Delmar Barry. After using him, Trautman effectively abandons Rambo, and doesn’t take notice until the bomb he lit has already exploded.

With the exception of perhaps the 4th film, violence in the sequels is portrayed as glorious, and seeks to thrill rather than horrify. The original takes a different, far more potent approach. Here, violence and death are repulsive and ugly, and serve as a defeat, rather than a triumph for the hero. When one of Rambo’s pursuers is killed, his death only serves to further damage the frenzied soldier. A far cry from the spectacular body counts of the sequels, this one death is a dark and sinister affair.

When Rambo finally takes revenge against his pursuers, it’s hardly a crowd pleasing moment. In one of the film’s most unsettling sequences, Teasle and several cops enter the woods in search of Rambo. With a thunderstorm looming overhead, we follow the officers through the underbrush as they’re systematically stalked and maimed with knives, wires, and booby traps. It’s a terrifying sequence, more akin to a horror film than an action extravaganza. That we see it from Teasle’s perspective only makes is more difficult to endure.

The Rambo of the sequels is something of a Mary Sue action hero. More an exercise in wish fulfillment, this later incarnation of the character was big, unmovable, and unstoppable before an army of enemies as numerous as they were ineffective. There were many such action heroes at the time, and this version of Rambo may well have been the prime example. That was not so in the original, where Rambo’s vulnerability was the main focus of the film.

Rambo is defined by his scars. The idea of untreated wounds from the war is perhaps the film’s central theme. This is established in the opening scene, where Rambo learns his friend died from cancer due to his exposure to Agent Orange. The disease was left undiscovered until it was too late, and it eventually destroyed him. Rambo suffers from a similar ailment, with his psychological scars he carried back from the war growing more pronounced throughout the film.

At the time, Post Traumatic Stress Disorder received little attention from film and television. First Blood may well be the first major motion picture to address it in such a frank and honest manner. Rambo is repeatedly thrust into vivid memories of his youth, which only further inhibits his desperate attempts to fit in and start his life anew. Once his trauma comes to the surface, it bleeds out into the world around him, transforming his life and the lives of those around him into a war zone. Unlike the character of the sequels, this Rambo spends the entire film lost, frightened, and losing control.

The film concludes not with a rousing set piece, but a final, heartbreaking meltdown from Rambo. Confronted by Trautman, Rambo finally vents his repressed feelings of abandonment and loneliness. Talking about his difficulties adjusting to normal life, he relates the day he witnessed the death of a close friend. Unable to hold back his suffering any longer, Rambo falls into Trautman’s arms and weeps. It’s here that Trautman does his only true act of leadership in the film, and finally shows Rambo the compassion he so desperately needed.

There’s so many more interesting things about the Rambo character than any of the sequels could ever say. Hardly fluff, the original First Blood is a masterwork that deals with the traumas of war as frank and heartbreaking a way as has ever been put to film. Unlike the films that followed, this wasn’t about the triumphant shedding of blood. It was about the cathartic shedding of tears.
Like this article? Check out these similar pieces by some of our top contributors!
While Waiting For Season 2 of ‘Westworld,’ Check out the Classic that Started It All
The Forgotten Hannibal Lecter Film: Revisiting ‘Manhunter’