Actress Jamie Lee Curtis announced recently that she’d completed her photography on the 2018 sequel to the film that made her a star, Halloween.

The announcement came via Curtis herself on Instagram on February 15th, with the actress saying that she was deeply saddened to be leaving her friends in Charleston, South Carolina where the movie was still being filmed. Whilst departing from the set, Curtis posed for one final picture with her co-stars, Judy Greer, who plays her daughter Karen, and Andi Matichak, who plays Laurie’s granddaughter Allyson.

Shooting on the project began on January 30th. This means Curtis was on set for roughly 18 shooting days, and since the project is still ongoing, many are concerned about what this means for the fate of Laurie Strode. Laurie has been twice previously killed off in the series, once via an offscreen car crash in Halloween 4, and again by Michael’s blade in Halloween: Resurrection. Her short time on set has left many worried about a repeat performance.

However, there are a few things to consider. One of course is how the original Halloween was made, and two are clues by Curtis herself which may lend a clue to Laurie’s nature. The original Halloween was shot in only twenty days, a rushed schedule even by the standards of the time. More surprising was the schedule of Donald Pleasance, the actor who played Michael’s doctor and nemesis, Dr. Sam Loomis. 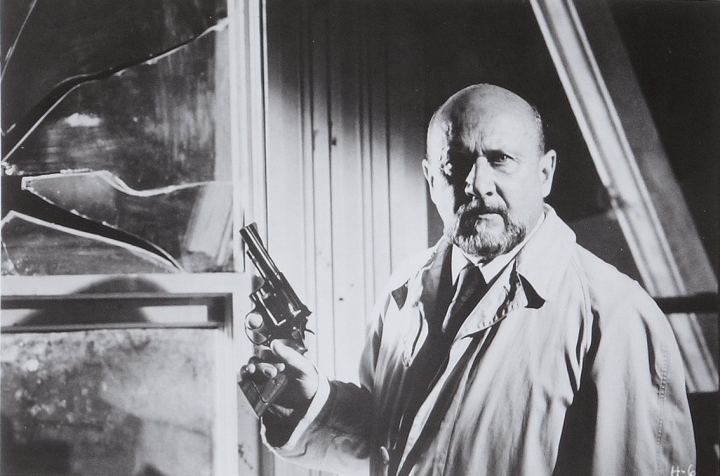 Due to the film’s low budget, Carpenter and company couldn’t afford to keep the classic character actor on set for very long. Because of this, Pleasance completed his scenes in a mere five days, far less time than Curtis’ 18. In spite of this, Loomis has a near constant presence in the movie, with his character’s brief scenes spliced seamlessly into the action.

It’s possible that Curtis’ short time on the set was for similar budgetary reasons, that and since movies are shot out of sequence, it would be far more convenient to film her scenes back to back.

Looking at the other news Curtis has shared, it seems Laurie has other things in common with Dr. Loomis. Earlier, the actress posted this image on Instagram of a Michael Myers target at a gun range. So, when I went back to do more gun training an OG fan of Halloween asked me to shoot his vinyl of the soundtrack. Not the actual vinyl but the cover. Needless to say, I felt the pressure but hit my target nonetheless.

Curtis had previously referred to her character in this new film as both a ‘survivor and protector.’ From her trip to the gun range, she’s obviously going to be proactive with firearms in her fight against the Shape. In the original film, it was Pleasance who carried a gun against the escaped lunatic. Could it be that Laurie Strode has become the new Loomis in this film, warning the other characters of how dangerous he is and taking up arms when he comes calling?

It’s entirely possible. Carpenter previously teased that Curtis had a ‘great part’ in this new entry, so it’s unlikely she’ll receive the same treatment she did on Halloween : Resurrection. Given that both Strode’s daughter and granddaughter will be on the receiving end of the Shape’s knife this time, she will have a lot of protecting to do.

Like Loomis, Laurie is not the main character of this film. Rather it’s her granddaughter Allyson, played by actress Andi Matichak. Matichak has also been bringing us news from the set, sharing these photos of herself in character and hanging out with a few presumably ill-fated friends from Haddonfield High.

The look of the Allyson character is clearly modeled after the look of the original Strode to survive a Haddonfield Halloween. Andi Matichak does have big shoes to fill. Here’s hoping she fills them well. She certainly had a good teacher.

Jamie Lee Curtis’ departure from the set is bittersweet. This will likely be the final time she portrays the beloved horror icon who made her a star, but hopefully it will be a glorious finish. Will Curtis get a better farewell than she did in 2002? We’ll all find out on October 19th.

Want more horror news? Check out these other articles by our top contributors!