Long ago, when the world teetered on the edge of nuclear annihilation, a director named Stanley Kubrick made a film called Dr. Strangelove. It took a humorous approach to the threat of nuclear war, something many at the time assumed was an all but assured fate for mankind. Flash forward to 2018 and two creators named Trey Parker and Matt Stone have used their long-running animated satire South Park to highlight the absurdity of climate change. Unlike Strangelove, South Park isn’t highlighting a hypothetical disaster, instead mixing witty humor with a sobering glimpse of a troubled world.

Parker and Stone were once counted amongst the so-called skeptics of climate change and incorporated this view into their show on numerous occasions. Nowhere is this more evident than in the 2006 episode, ManBearPig. A fan favorite, the episode skewered Al Gore and his efforts to spread awareness of climate change, replacing it with an obviously fictional beast named ManBearPig. The message was obvious. Like ManBearPig, climate change was but a delusion that Gore used to get attention, and any efforts to stop it did more harm than good. ManBearPig was but a fantasy then. Over a decade later with evidence mounting and the situation growing more urgent by the day, Parker and Stone have changed their tune.

South Park‘s change of heart came by way of a two-parter on the show, with the episodes Time to Get Cereal and Nobody Got Cereal? which reveal that ManBearPig is very real. The beast turns out to be a demon who made a deal with the elders of South Park so they could keep certain luxuries, but the deal only lasts so long before ManBearPig comes to collect his end of the bargain. Now ManBearPig has returned, indiscriminately killing the people of South Park in a bloody rampage. After seeing several people killed by ManBearPig, the boys accept the threat is real, sparking them to tend to some urgent business. They need to apologize to Al Gore.

After ManBearPig appears, the boys track Gore down and beg for his help. The character has changed a lot since 2006, worn down and disillusioned from the fight against ManBearPig. South Park still pokes fun at Gore, particularly in the second half of the miniseries, but overall he’s a much wiser, almost sagely character than his earlier incarnation. The former presidential candidate delivers some of the more sobering parts of the show. When he tells the boys they must convince the world of the dangers of ManBearPig, Stan tearfully says it’s impossible. Gore retorts that people will mock them and make fun of them for their efforts, a clear reference to how Parker and Stone mocked Gore’s warning in the past.

Yeah, sounds really hard, doesn’t it? People might not believe you and like make fun of you and stuff. Poor you guys, huh?

It’s no coincidence that Stan and Kyle don parts of Gore’s attire in this scene. Parker and Stone are joining the fight, knowing full well how they’ll look to those who refuse to see the dangers of climate change. They’d know, having refused to see it themselves and ridiculed those who spoke about it. Immediately after they profess the dangers of ManBearPig, they are thrown in jail and openly mocked by the police even as the town falls apart around them.

Deniers of climate change are on the receiving end of some, especially on point satire. The episode portrays them as insufferably smug to the point of being dangerous to those around them. One particularly effective scene shows a diner patron with his family, dismissing his wife’s concerns on ManBearPig even as the beast enters the restaurant to slaughter the citizens of South Park. Even when he’s made aware of the problem, the man shows no concern for his wife and children, dismissing the monster even as it bears down on his family. The man’s smugness doesn’t save him when the monster finally arrives at his table.

The show also calls attention to the importance of scientists and criticizes skeptics for not taking them seriously. When ManBearPig slaughters customers at Jared, Detective Yates is told that ManBearPig is responsible. When Yates dismisses ManBearPig as a goofball theory, he’s told that forensic scientists have found evidence of ManBearPig at the scene. Rather than change his opinion based on new evidence, Yates only becomes angrier.

Fuck scientists! Why are you trying to figure out what’s going on this scientists!?

South Park places the blame for climate change on older generations. It’s later revealed that in their youth, South Park’s elders made a deal with ManBearPig so they could keep their cars and ice cream. Stan later confronts his grandfather for making the deal with ManBearPig, asking how he could do something that would knowingly endanger the future of his children and grandchildren. The elders respond with a series of excuses, saying they thought they’d be dead before having to suffer any consequences. For the most part, the scene is played straight. When Stan speaks, his betrayal feels real. 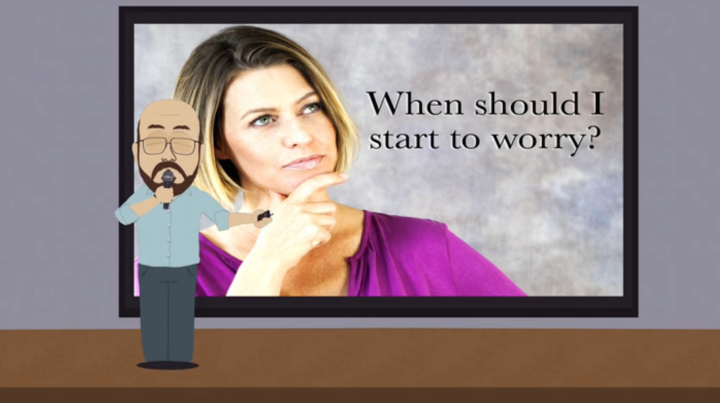 The elders are to blame for ManBearPig, while the adults do nothing meaningful to stop it. All the adults are preoccupied with other things, like Stan’s father growing marijuana, Yates’ obsessed search for the four boys, or most of the citizens gathering in a meeting and arguing over when they should start worrying. The adults continue to bicker and argue about the existence of ManBearPig, taking no meaningful action. The scene is quite comical but does point to the sad truth about the debate about climate change. All the time spent arguing is time that didn’t go towards averting it. The adults never become active, even when Satan himself bursts in on the meeting.

Repeated references are made to the game Red Dead Redemption II. In the first part of the episode, this seems like an innocent easter egg. In truth, it’s one more example of South Park’s adults not dealing with the problem. Yates constantly says he’d rather be at home playing his game even as the bodies start piling on. After Stan escapes jail, he finds that his father Randy spent all his time playing Red Dead Redemption instead of helping him. Rather than deal with the problem, South Park’s elders hide from it, even as their children become increasingly at risk. This comes much to the ire of Eric Cartman, who lashes out at a cop for not paying attention.

Could you get off your video game for five fucking seconds so we can have a conversation!? 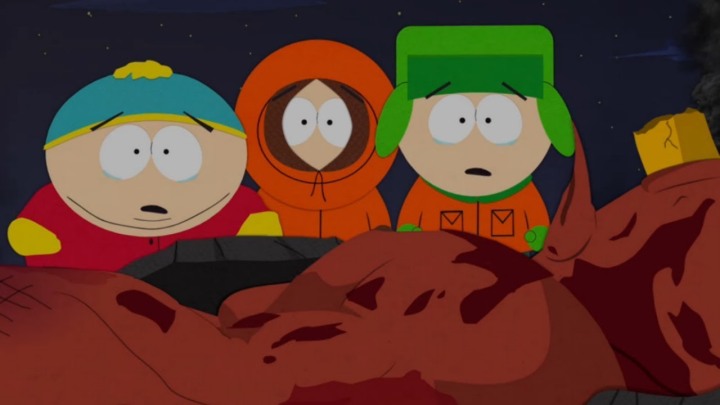 Often in South Park, the problem is resolved via a series of absurdities, but this latest miniseries gives its audience no such closure. The boys enlist Satan to try and help them, and though he puts up a good fight, the Prince of Darkness and fan-favorite character is no match for the reality of ManBearPig. He succumbs to his wounds, and once more tells the boys that it’s up to the young to avert disaster, leaving them no closer to victory than they were before.

There are several times when Parker and Stone talk directly to the audience they’d once told climate change was nothing to fear, admitting they were wrong and imploring their viewers to act. One is during the penultimate scene of the miniseries where Yates finally accepts the reality of ManBearPig, and implores the other citizens of South Park to walk away from Red Dead Redemption II in order to deal with real-world problems.

It’s never too late to start trying to do the right thing.

The miniseries even makes reference to itself at one point as the start of Parker and Stone’s efforts to help make a difference. Though Al Gore’s appearance in the latter half of the miniseries has been criticized, there is one scene where he gathers the boys and Satan for a viewing of a film he made and asks them a question.

What would Al Gore do?

According to Gore, the answer is to make a film to spread awareness and inspire action. This is, of course, the very episode we’re watching. Parker and Stone, in a clever bit of self-referential humor, admit that these episodes are their equivalent of Al Gore’s An Inconvenient Truth. They also acknowledge that it’s not nearly enough to solve the problem.

But the most earnest of these moments comes at the end of Time to Get Cereal. After learning the truth about ManBearPig, Stan, Kyle, Eric and Kenny, clothed in Al Gore’s cape and Nobel Peace Prize, emerge from the public library, pleading with the citizens of South Park to work together to defeat ManBearPig.

We all have to work together, you guys. This one time. We all have to put our pride aside, and be willing to say maybe we were wrong.

South Park admits that the situation is dire, but that’s no excuse to do nothing. South Park does try, but by the end, the show asks with its trademark cynicism if it will really be enough.

Nobody Got Cereal? ends with the boys trying to make another deal to dispel ManBearPig. All they have to do is give up certain luxuries and he’ll be gone forever. However, their efforts are once more thwarted by the adults of South Park. When told that ManBearPig will leave if everyone gives up soy sauce and Red Dead Redemption II, the adults refuse. Once more, the refusal of the older generation to change forces the boys to sign away their future. In a scene lampooning the ineffectiveness of certain legislations made to curb climate change, the boys are forced to draw up a new contract, once more ignoring the problem, until the next time ManBearPig comes back to collect his debt. The episode all but assures that ManBearPig will return, and that South Park may be doomed.

There is a certain wisdom in bringing satire to such dark times. Laughter helps many better accept the dire circumstances they’re in. It was this way of thinking that inspired Dr. Strangelove. The difference is Strangelove told of a hypothetical doomsday. There is nothing hypothetical about what Parker and Stone shine the light on with this latest effort. Like ManBearPig, climate change isn’t a faraway fantasy.

I hope you liked this article and be sure to check out more of our content at ScreenHub Entertainment such as my articles on Why Ghostbusters Was a Horror Movie and how Pokemon Stole Music from a Slasher Movie.

Be Sure to WatchTime to Get Cerealand Nobody Got Cereal.