As a child of the 90s, few films resonated with the culture like Terminator 2 : Judgement Day. On every front from its reviews to its box office, it seemed to have dwarfed its predecessor as the Schwarzenegger movie to end them all. And though I still have boundless love for Cameron’s innovative sequel, as I grow older, more and more I find myself going back to 1984 to the adventure that started it all.

The Terminator has several claims to fame. It jumpstarted the career of writer/director James Cameron, turned Arnold Schwarzenegger into a household name, and spawned one of cinema’s most lucrative franchises. But this story of a cyborg’s attempt to kill a waitress is a different machine from any of its sequels. While its successors put a heavy focus on action, the original was born from a nightmare. 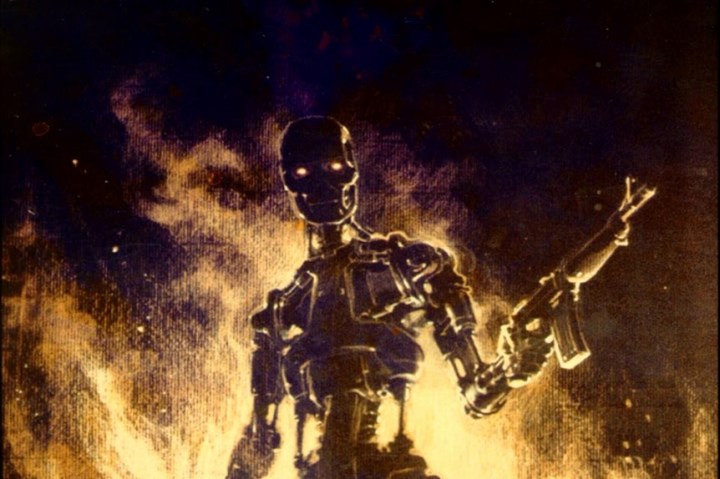 The iconic image of the Terminator’s Endoskeleton rising out of the fire came to Cameron in a nightmare while on the set of his ill fated debut, Piranha II: The Spawning. From that image, Cameron developed the story. With a big dream and little clout, Cameron worked for several years to attain funding for the project. In the end, he and producer Gale Anne Hurd only scraped together a meager six million dollars, a low budget even for the time. In spite of those limitations, they turned out one of the best science fiction films in history.

The original film stands as a testament to Cameron’s skills as a writer and director, where that little bit of money was carefully used to create a universe with a real sense of scope. With little money for set pieces, Cameron instead put a heavy focus on building suspense. At times, The Terminator feels less like an action film and more like a horror movie. Specifically, it follows a lot of the conventions of slasher films.

Slasher films rapidly rose in popularity throughout the early 80s, and by the time The Terminator was released, the formula was well established. Generally, an unstoppable killer sliced their way through the cast, and in the end only a lone heroine could defeat them. That’s the plot of The Terminator in a nutshell. 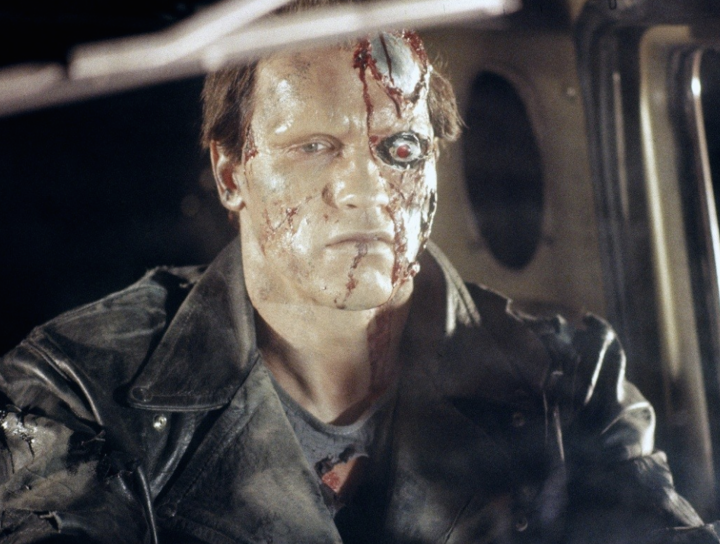 While The Terminator does have its share of action and gunplay, most of its power comes from a superb grasp of tension. From the moment young Sarah Connor falls in The Terminator’s crosshairs, she and the soldier sent back to protect her never stop running. The film offers no levity during the chase, leaving the audience feeling like they too are being chased. 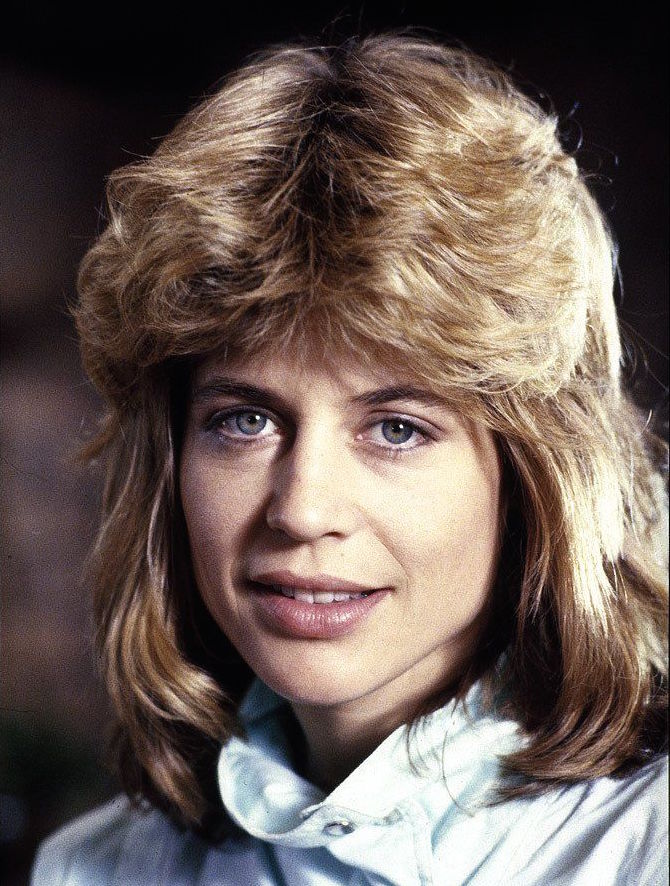 Linda Hamilton as Sarah Connor has gone on to be recognized as one of cinema’s most iconic heroines, and for good reason. Her arc in the first two movies is an extraordinary one to watch where she goes from a down on her luck waitress to a hardened soldier. While many remember the jaded character of the first sequel, the Sarah Connor of the original faces some more unique challenges. In the sequel, we see a woman who has lost everything. In the original, we see it happen.

This Sarah Connor starts off the film with a completely unremarkable life, who suddenly finds the weight of the world placed on her shoulders. Unprepared to accept the responsibility, Sarah heavily resists the burden’s forced on her. All the while, Sarah gradually loses everything and everyone that matters to her, from her friends to her family. Eventually, she’s left to face her enemy alone.

Like the prototypical final girl, the only resource Sarah has to rely on is herself. After an odyssey of tragedy and bloodshed, Sarah accepts her destiny, and manages to fully evolve from an unremarkable waitress into the mother of humanity. Watching her transformation from a frightened victim into a proud, capable warrior is a deeply satisfying experience. That she begins the story as an ordinary person is what makes it so extraordinary, especially when you consider what she must defeat.

While most of the films feature some form of machine aiding the heroes, Sarah Connor is not so fortunate. The T 800 of the original remains one of the best, if not the best villain in the series. One could argue the T 1000’s ability to blend in is more frightening. James Cameron himself compared The T 800 to a tank and the T 1000 to a Porsche. But while a Porsche may be sleek and fast, a tank will crush it. More-so than the T 1000, the original T 800 created a sense of hopelessness that it could not possibly be conquered. Like the Shape of  Halloween infamy, The Terminator is an unfeeling villain that just won’t die. 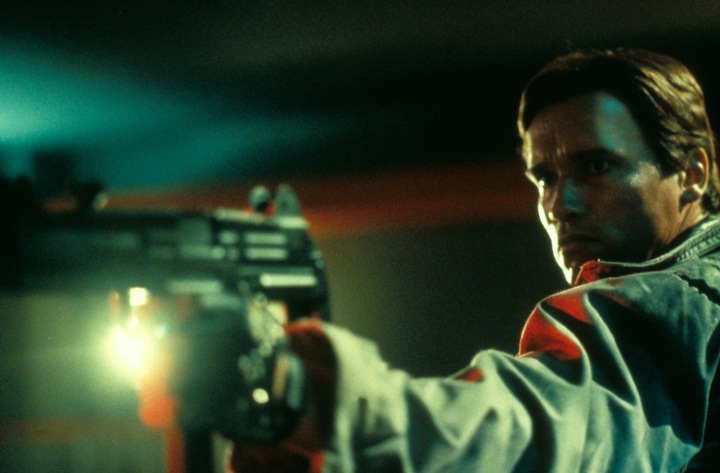 The sequels feature villains that are regularly challenged and bested in numerous exciting fight scenes. The original T 800 rarely meets any meaningful opposition. This is perhaps best displayed during the police station sequence. In a building surrounded by cops, we assume Sarah is safe. That sense of safety is destroyed when the Terminator arrives, and systematically slaughters every cop in sight. He’s less of a character, and more of an unstoppable force. Like Reese says, that’s all he does.

Like slasher villains, the T 800 wears a mask. When it first arrives, the Terminator looks human, but little by little, its appearance is revealed as nothing more than a front. Piece by piece, the outer layers are pealed away, offering a glimpse of the metal skeleton beneath. Eventually the skin itself starts to rot, turning gray and earning the Terminator an escort of flies wherever he goes. It’s a very ugly, and deeply unsettling transformation. 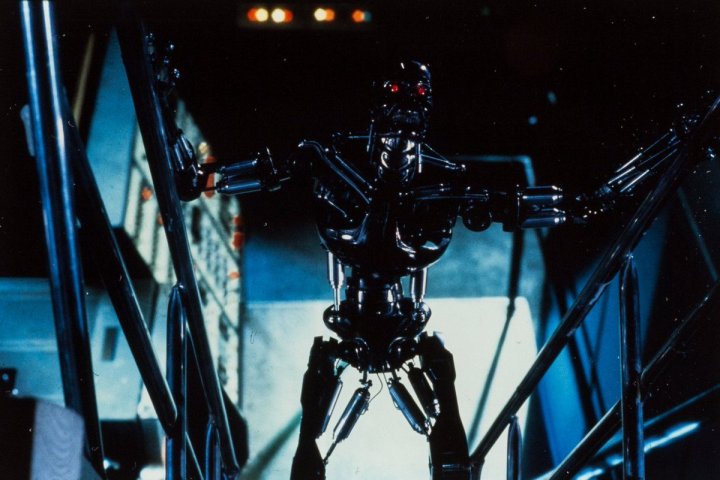 Like all slasher films, the mask hides a mystery. In the final act, that mystery is revealed when the skin is burned away, revealing the T 800’s red eyed visage. It’s noteworthy that this is the only one of Arnold’s Terminators to ever fully lose his skin. Whereas those characters found a sense of humanity, this Terminator never had any. If the armageddon Sarah is to defeat had a face, this would be it. But the T 800 isn’t the only character wearing a mask.

REESE: A MAN OUT OF TIME

Perhaps the most unsung hero of the series is Michael Biehn’s character of Kyle Reese, a soldier sent back to protect Sarah. A member of the human resistance since childhood, it’s through Reese that Sarah learns of the future, and her role in humanity’s victory. Reese’s stories and flashbacks give an otherwise small scale film a real sense of scope. But while every guardian comes back with stories, Reese also returns with a deep sense of agony. 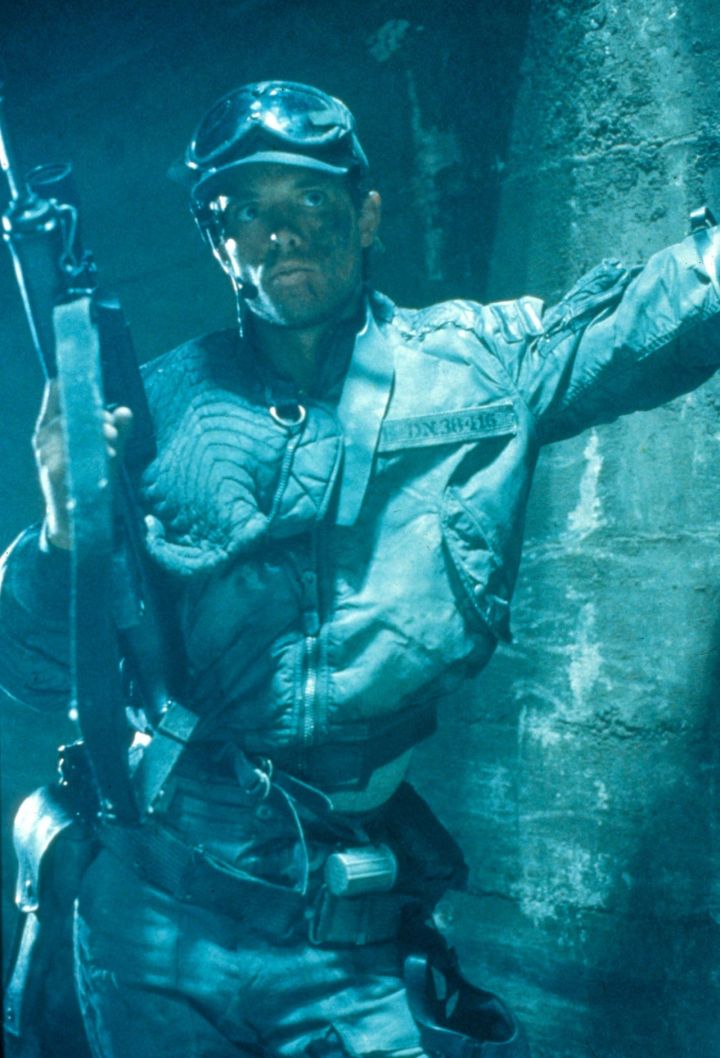 Reese is a wounded character, forever plagued by bad memories and vivid nightmares. In spite of his pain, he proves to be just as dedicated as his enemy on the battlefield. Both Reese and the Terminator wear masks. The Terminator wears a human face to blend in, while Reese tries to be machine-like to avoid his pain. In the end, both lose their masks, revealing the Terminator’s cold endoskeleton, and Reese’s uniquely human motivations for coming to protect Sarah.

The machines of the sequels initially come purely based on their programing. Throughout Reese’s war experiences, his single source of hope is a photograph of a youthful Sarah. When the source of his hope is threatened, Reese goes back to protect her. Though the machines come back for a mission, Kyle Reese came across time for love.

All these elements come together to create a very dark movie. The violence is brutal and abrupt, the world is dark and sinister, and some of the film’s most memorable moments are not crowd pleasing set pieces, but moments of quiet dread. The sequels are brightly lit spectacles, while most of the original takes place in the shadows.

The craftsmanship of the original is perhaps best shown during Sarah’s first meeting with The Terminator. All throughout the T 800’s search of the club, the shots get progressively slower in speed until the pair meet. The first gunshot returns the shots to their proper pace, releasing the tension and kicking off the shootout that follows.

Throughout the film, the colors become colder and more sinister. Eventually, Sarah is forced to combat the relentless T 800 in a factory, surrounded by machines as cold and unfeeling as the monster she’s running from. Whereas most of the sequels end in spectacular fire, the original film ends in with cold metal.

The melancholy love story between Sarah Connor and Kyle Reese is perhaps the film’s strongest element. Sarah comes to rely on Reese for protection and guidance, but she also helps Kyle navigate threats of his own. Caught in a world he doesn’t understand. Kyle nearly gets himself killed by police. Only Sarah talking sense into him saves his life. She also helps Reese dress his wounds after the police station shootout, though those aren’t the only wounds she helps to heal. Sarah needs Reese so she can better understand her enemy, and Reese needs Sarah so he can fully embrace his repressed humanity.

Sarah Connor and Kyle Reese begin the story as a vulnerable victim and a hardened soldier respectively. Their roles gradually transition as the film goes on. As Sarah becomes more tough and unyielding, Reese gradually lets his guard down, laying bare his emotions. He reveals that it was Sarah herself, rather than her son, that gave him hope in the future, and he came back in time because he loved her. After the pair become intimate, it’s the one time in the film that Reese ever smiles. The moment is tragically fleeting. 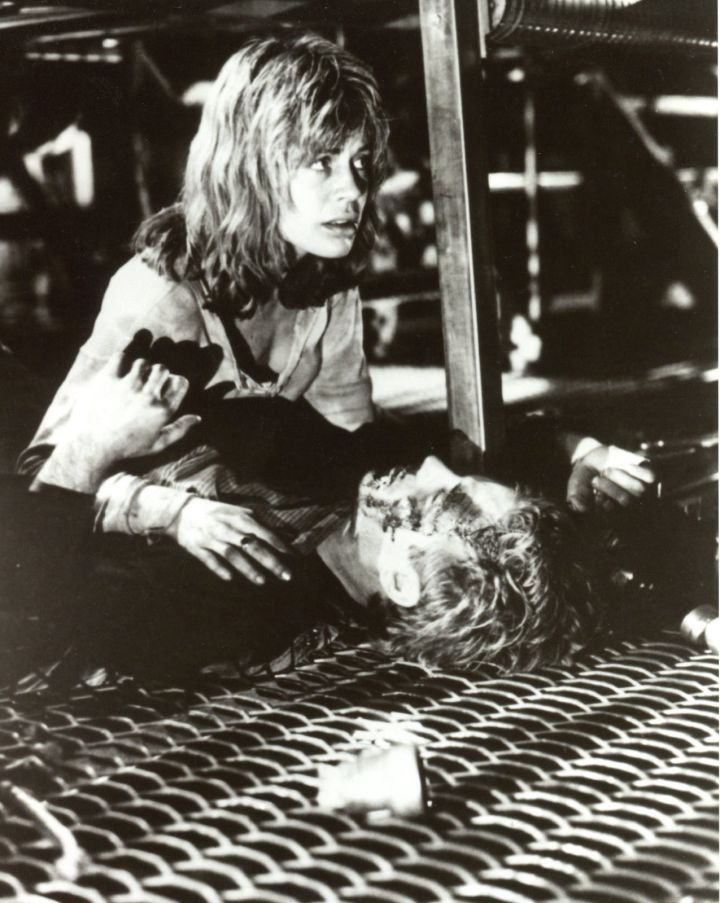 During the film’s final chase, Reese is wounded, leaving Sarah to carry his burdens as well as her own. Their partnership in these scenes shows how their relationship has evolved, with Reese’s vulnerabilities laid bare and Connor’s inner warrior unlocked. Together, the pair battle the Terminator to the death. The Terminator is an action film, but only second. It’s a tragedy first. Perhaps that’s what sets it apart from its sequels most of all. 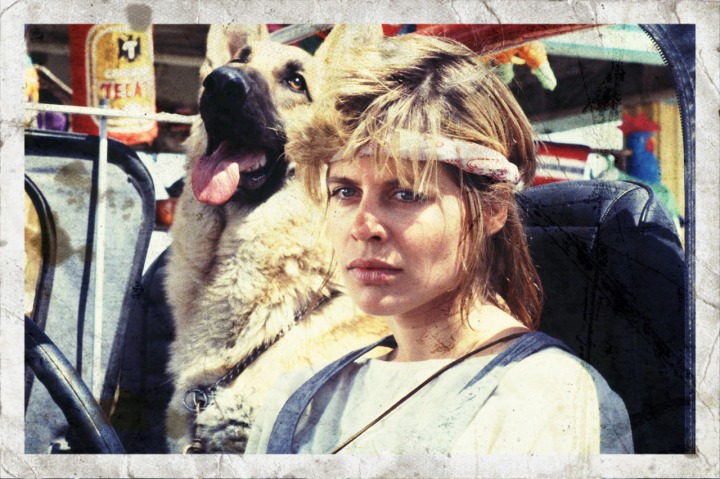 Following the success of Terminator 2, most of the sequels attempted to recapture its grand scope and nail biting action. For this, the more small scaled suspense of the original has been lost in the rest of the series. This is a shame as, apart from a few effects shots, the original movie has aged very well, featuring effective set pieces, a frightening villain, and two great heroes with two great arcs. For me, that’s what the series will always be about, the tragic love story of a desperate waitress and a burnt out soldier, both in a hopeless flight from the personification of armageddon.

Like this article? Be sure to check out these other similar pieces by some of our top contributors!

Why ‘First Blood’ Stands Apart From Its Sequels

One thought on “Love Is A Battlefield: Remembering ‘The Terminator’ – ScreenHub Entertainment”