Quentin Tarantino recently spoke to Joe Rogan about his most recent feature film, Once Upon A Time…in Hollywood, right as the film’s novelization (also penned by Tarantino) hit store shelves. Tarantino didn’t hold any punches in his justification for Bruce Lee’s behaviour in the scene and the reply is a little, well, Tarantino. But while the director says that Bruce Lee would have totally acted that way, based on the testimony of other American stuntmen at the time, we have our own outlook on the scene and why it played out the way it did.

Shortly after Tarantino’s latest, Once Upon a Time… in Hollywood, hit the big screen, there was controversy. That’s usually the case for a Tarantino movie. But this time, it had nothing to do with the violence or the dialogue. Set in 1969, Once Upon a Time… in Hollywood follows two has-beens in the twilight of their careers and their interactions with famous characters and events; all with a certain Tarantino style to it all. One of those characters was a cartoony portrayal of martial arts legend, Bruce Lee. His daughter, Shannon however, wasn’t too impressed with how her father was portrayed on the big screen in Tarantino’s version of history and Mike Moh, who portrayed Lee in the film, was conflicted with the scene as well. Most recently, podcaster Joe Rogan has come out sharing his disapproval of the scene in question.

Shannon Lee shared her thoughts on her father’s role in Once Upon a Time… in Hollywood shortly after it’s international premiere to The Wrap. Anyone can see where Shannon is coming from once you learn a little bit about her father, as the Bruce Lee in the movie is a far cry from reality, with Shannon stating, “but they didn’t need to treat him in the way that White Hollywood did when he was alive”. She didn’t stop there and tore into Tarantino’s version of Bruce, that her father came across as an “arrogant asshole who was full of hot air”.

In reality, Bruce Lee was known for being peaceful and humble, not one to pick fights. He was passionate about knowledge, studied philosophy, and expressed his ideologies through martial arts and by teaching anyone who wanted to learn. So naturally, she would feel saddened and even betrayed at the caricature that befell her father’s legacy on the big screen, by a director who is a self-professed fanatic of Bruce Lee’s work.

In other words, Tarantino’s Lee was completely off the mark of how Bruce Lee was in real life. The clip embedded above alone showcases how different the two Lees are. Tarantino’s Bruce Lee was looking for any excuse to fight and did indeed come across as arrogant, pompous, entitled and egotistical, a stark contrast to the “be like water, my friend” Bruce Lee that walked this very Earth. So despite all that, did Shannon Lee only see a caricature and miss the potential point of the scene? Was Tarantino’s Bruce Lee supposed to be inaccurate?

The Once Upon a Time… in Hollywood scene in question is actually a memory belonging to Cliff Booth, played by Brad Pitt. Booth is a stuntman and chauffeur to Rick Dalton (DiCaprio) and has perhaps seen better days, despite his career and position as a friend and aid to a popular actor. Booth lives in a trailer behind a drive-in cinema, eats poorly, owns a busted car and may or may not have killed his own wife. While working on Dalton’s TV antenna on the roof, he begins to daydream about his time on the set of The Green Hornet and his encounter with Bruce Lee. In the scene, he goads Lee into a sparring match (which he wins) at the cost of his job on the set after he damages Randy’s wife’s car.

On the surface, this is a pretty simple scene. Booth, at a low point in his life, begins to think back on the scene after being told by Dalton there won’t be any work on this shoot for him due to the Bruce Lee incident. But to Booth, he’s the cowboy in real life, not Dalton who simply plays them on screen. When Booth heads to the Spahn Movie Ranch (where he worked for Bounty Law with Dalton), the camera and the set envoke the Wild West, with the lone gunfighter out to save the day, or in this case, his friend George, who he believes is being manipulated by hippies. Booth sees himself as the hero, the tough guy, a saviour and because of these delusions (and so much more), Booth becomes an incredibly unreliable narrator. 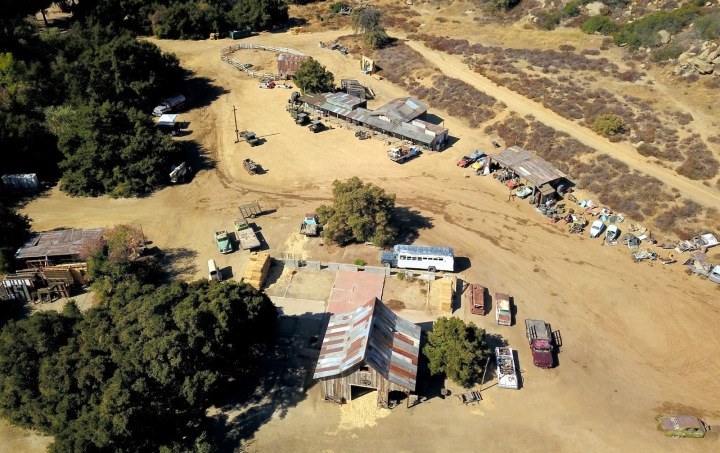 The set for Spahn Ranch, the neo-western setting perfect for Cliff Booth’s image of himself.

So when he begins to think back on his time on The Green Hornet, we cannot take his memory as fact, because Booth is putting is own Wild West spin on events. While Sharon Tate (Margot Robbie) remembers Lee on The Green Hornet as a humble, smiling teacher, which is more in line with history (Bruce Lee did teach Tate on that set), Booth sees Lee as an enemy of sorts. He waltzed onto set and as the toughest cowboy in the western that is his fantasy life, he picks a fight with the best fighter in the industry; a fighter he sees as pompous and arrogant and puts him in his place like the hero should. Booth, in all honesty, is full of crap.

So while Shannon Lee may be upset in seeing her father come across as, well, the worst version of himself and entirely inaccurate to his true self in Once Upon a Time… in Hollywood, she can at least rest soundly knowing it’s supposed to be wrong and inaccurate. That isn’t the true Bruce Lee, but one that lives in Booth’s “once upon a time”, fairy tale version of reality. Who knows what did really happen, but chances are Booth and Lee did not actually have a macho sparring match on set, but you can bet Booth made a real mess of things and did damage Randy’s wife’s car.

Buy your tickets for ‘Once Upon A Time In… Hollywood‘, and let us know if you agree. You’ll also be helping to support ScreenHub as we grow!

Tarantino has responded to the allegations of Bruce Lee’s family and friends, saying “The way he was talking, I didn’t just make a lot of that up. I heard him say things like that, to that effect”. He also defended Booth’s apparent superiority in his fight with Lee by explaining “Could Cliff beat up Bruce Lee? Brad would not be able to beat up Bruce Lee, but Cliff maybe could… Who would win in a fight: Bruce Lee or Dracula? It’s the same question. It’s a fictional character. If I say Cliff can beat Bruce Lee up, he’s a fictional character so he can beat Bruce Lee up.” While some will undoubtedly still take issue with Lee’s perceived arrogant and confrontational attitude in the scene in question, and the assumption that he would lose to Dracula, at least we now have some insight into Tarantino’s thought process.

What do you think? Did Tarantino drop the ball when it came to depicting the greatest martial arts actor of all time or does breaking away from fact help build up Booth’s character? Let us know what you think and be sure to check out our spoiler-free and spoiler-filled reviews of the movie as well as why Hollywood exists in the same universe as Inglorious Basterds.

5 thoughts on “Did Shannon Lee Misunderstand Bruce Lee’s Fight Scene in ‘Once Upon a Time…in Hollywood’? – ScreenHub Entertainment”